But I’ve never written one about George Clayton Johnson. And now the news of his death at 86 is making me wish I had done so much sooner.

True, I did spotlight one of his wonderful TZ episodes before now, “A Game of Pool” (twice, in fact – here and here). But no post yet about “Nothing in the Dark”? “Kick the Can”? “A Penny For Your Thoughts”? There’s hardly a Twilight Zone fan out there who doesn’t list at least one of those classics among his favorite episodes.

Johnson made his mark on the Zone even beyond those four episodes. Serling based his scripts for “Execution” and “The Four of Us Are Dying” on short stories written by George. Small wonder that Rod mentioned his name (with Beaumont’s and Matheson’s) from the podium as he accepted his second Emmy for writing The Twilight Zone.

Johnson went on, of course, to write many other memorable stories for Star Trek and other series, and he co-authored the landmark sci-fi novel “Logan’s Run”. But TZ was his launching pad. 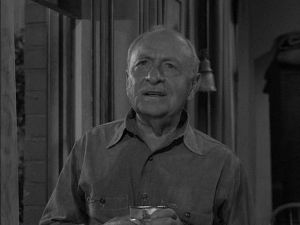 Reading a lot about TZ has given me a greater appreciation for Johnson’s talent. He always came across as a gregarious and generous man whose recollections never failed to entertain. (Check out his story in this post, or what he had to say about Charles Beaumont.) I’ve written several posts about why TZ “works,” and Johnson often was there to supply the perfect quote.

“A Penny For Your Thoughts”

See, Johnson, who called TZ “wisdom fiction,” got it. Like Serling, he knew a weird story wasn’t enough. Without the qualities he describes in that quote, why should we care about the story on the page or on the screen? And those qualities shine through in those marvelous scripts he did for TZ (and others).

So here’s a toast to George Clayton Johnson. Thank you for sharing your talent with us and for leaving your mark on the most imaginative series of all time.

And George? I WILL write about those other three episodes. Promise. :)

As long as people talk about you, you’re not really dead. As long as they speak your name, you continue. A legend doesn’t die just because the man does. 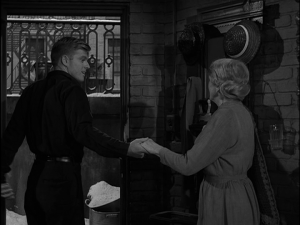 “Nothing in the Dark”

Posted on 12/25/2015, in Twilight Zone and tagged A Game of Pool, A Penny For Your Thoughts, Execution, George Clayton Johnson, Kick the Can, Nothing in the Dark, The Four of Us Are Dying. Bookmark the permalink. 13 Comments.