Serling’s Re-Zoning Efforts: “The Four of Us Are Dying”

Ever assume, when you first watched The Twilight Zone as a kid, that Rod Serling wrote every episode?

I’ve had a number of people tell me they thought that, and let’s face it: It is a logical assumption. He personally introduces each tale, and they all conclude with his distinctive voice wrapping up the proceedings with a memorably wry comment or two. 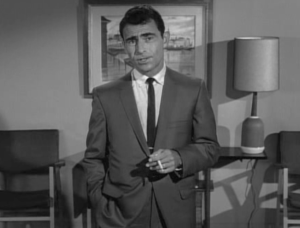 But no, other fine writers contributed some terrific stories. Still, Serling wrote a staggering 92 of the 156 episodes, or nearly two out of every three. No wonder he admitted to feeling burned out as the series entered its home stretch.

Not every Serling script was an original, however. Sometimes he adapted the works of other writers. He’d pay for the rights to a story, then turn it into a Twilight Zone.

This might sound like relatively easy work, but it wasn’t. In many cases, he took the basic idea and turned it into a script that barely resembled its ancestor.

Such was the case when Serling turned George Clayton Johnson’s story “All of Us Are Dying” into “The Four of Us Are Dying” for Twilight Zone‘s first season. END_OF_DOCUMENT_TOKEN_TO_BE_REPLACED

Matheson: Why I Named It “Spur of the Moment”

The title of a particular TV episode means almost nothing to the average TV viewer. An entertaining story is all we ask. Yet some writers do take care with their titles … and it can even affect how good the episode is.

I love that title! She married on the “spur of the moment,” really. She married for emotion. And there was also the spurs of the person riding the horse … there were multiple and hidden meanings in that title, which is something I like to do. Titles are very important, and it’s really nice if you can get a good one. As a writer, I prefer to have the title occur to me instantly — even sometimes before I do the story. It colors how I approach the story, and I feel much more comfortable.

Having a catchy title must have helped. There’s a good reason I included “Spur of the Moment” on my list of the best Twilight Zone episodes to watch on Halloween. END_OF_DOCUMENT_TOKEN_TO_BE_REPLACED