The Latest Twilight Zone Reboot Gets Booted — What Went Wrong?

I’ve heard quite a range of reactions to the news that Jordan Peele’s reboot of The Twilight Zone won’t be back for a third season. Some Zoniacs are sorry it won’t be back. Many more are glad. Me? I’m somewhere in the middle.

This isn’t because I’m trying to be diplomatic. I’m genuinely ambivalent. There were elements I liked about the new version (one of which has nothing to do with the show itself). There were others I didn’t like. Most of them I touched on in previous posts about the series, and I summed them up after Season 1 in this one.

Curiously enough, the latest reboot wasn’t cancelled by the network, but by the creators themselves: Jordan Peele and his company, Monkeypaw Productions:

Why the kibosh on a third season? It’s hard to say, at least from the outside looking in. Maybe the pandemic made it difficult to get things rolling again. Perhaps they found themselves getting interested in other projects. Or it could be that we should take their statement at face value: They told their stories, it was fun, but now it’s time to move on.

I can’t help but wonder, though, if negative reaction to the series played a part in the decision. As you might imagine, I followed fan response pretty closely on social media, and every time the latest reboot came up, the opinions ran at least 80/20 against it. It may be that Peele and his collaborators were able to shrug this off, but hey, we’re human. I’d be surprised if that sort of negativity had no effect whatsoever.

So what went wrong? Let’s mention a couple of things that have come up previously, then get into some other factors we haven’t discussed before. END_OF_DOCUMENT_TOKEN_TO_BE_REPLACED

My “Big Tall Wish” for the 2019 Twilight Zone Reboot

I never did go back and wrap up my thoughts about the latest Twilight Zone reboot, did I?

I wrote a pre-release post explaining why I felt it shouldn’t be dismissed out of hand, as some Zone fans were doing. As a fan of Jordan Peele’s “Get Out”, I kept reassuring fans here and on Twitter. I then reviewed the first four episodes. But that was it.

This wasn’t by design. I anticipated writing more about it. But I have to admit, despite the obvious care that’s gone into it, and the talent both in front of and behind the camera, my interest began to waver about halfway through the 10-episode first season.

Mind you, I had some reservations from the start, despite my initial enthusiasm for the project. For example, the length of the episodes, averaging about 45 minutes or more, didn’t help.

There’s a reason the original TZ spent only one shortened fourth season airing hour-long episodes: Although you can certainly tell some good stories over a longer time slot, it’s almost impossible to maintain the snap that graces the classic episodes we all know and love.

The original TZ pulled you in quickly and built its universe at a brisk pace, setting up those famous twist endings. The new TZ, yes, gave us a few surprises along the way, but we didn’t have many what-the-hell moments just before the credits rolled.

END_OF_DOCUMENT_TOKEN_TO_BE_REPLACED

Rebooting the Twilight Zone — and Staying on Message

I recently started to write a conventional review of “Replay”, the third episode of the new Twilight Zone on CBS All-Access. But I soon got bogged down in a lengthy synopsis, and it just wasn’t clicking for me.

Besides, if you’re interested enough to read an article about a particular episode, you’ve likely seen that episode. No recap is needed. So let’s try something that, I hope, will work whether you’ve seen “Replay” or not. Let’s talk about … messages.

If there’s one piece of conventional wisdom we’ve all absorbed about The Twilight Zone, it’s this: It was a “message” show. TV censorship was notoriously strict in the late 1950s and early 1960s, so Serling cleverly snuck his viewpoints in via allegory.

Instead of doing a show about, say, Senator Joseph McCarthy — whose investigations into charges of Communist infiltration in the U.S. government helped fuel the notorious “red scare” of the early 1950s — Serling would write “The Monsters are Due on Maple Street”. That way, he could show us the corrosive effect of suspicion and betrayal on ordinary Americans without saying one direct word about politics.

But while there is no question that Serling wove messages into the original TZ, people seem to forget that he didn’t do it all the time. Yes, some episodes had direct, pointed messages — like “He’s Alive” and “Deaths-Head Revisited”. And the Fidel Castro look-alike in “The Mirror” left little doubt he thought the Cuban leader might soon meet a violent end. 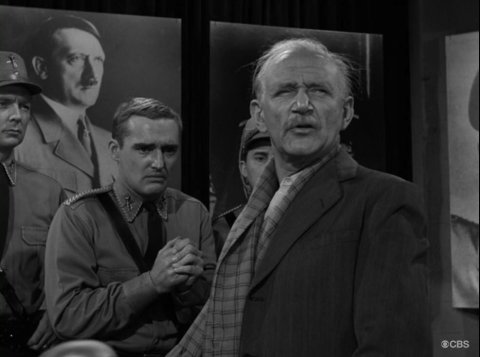 Other episodes functioned as modern-day fables. There are indirect messages that can be detected and appreciated if you’re looking for them, but they’re not essential to a “surface” enjoyment of the story. Examples include “People are Alike All Over”, “Eye of the Beholder”, “The Old Man in the Cave”, and “The Obsolete Man”, to name just a few.

END_OF_DOCUMENT_TOKEN_TO_BE_REPLACED

The New Twilight Zone on CBS All-Access: Not Perfect, But Very A-PEELE-ing

I’m used to writing “spoiler alert” on some of my articles about the original Twilight Zone, but it’s practically a joke. I mean, we’re talking about a series that debuted almost 60 years ago. And yet here I am, reviewing a new TZ, so it actually makes sense to warn people who may not have seen the initial episodes — or who are withholding judgment until they learn more about them.

So let me give you my impressions of “The Comedian” and “Nightmare at 30,000 Feet”. I’ll try to keep them, yes, spoiler-free.

First off, this is a really handsome production. That’s not much of a surprise, of course, given the involvement of producer Jordan Peele, but for anyone familiar with the previous two reboots, it’s nice to see. CBS is finally giving TZ the respect it deserves. Gone is the cheap look of the TZ that ran from 1985-1989, and again in 2002. The cinematography and direction are feature-film-worthy.

And as you’ve probably heard, the show seems loaded with Easter eggs. For example, sharp-eyed viewers will spot Willie from “The Dummy” lounging in a scene from “The Comedian”. There are also in-jokes, such as the pilot’s name in “Nightmare”: Captain Donner. The director of the original episode? Richard Donner. (Here’s a spoiler-filled list of every Easter egg, courtesy of TV Guide.) END_OF_DOCUMENT_TOKEN_TO_BE_REPLACED