“This episode looks funny. Was it broadcast live?”

Hardly a Twilight Zone marathon goes by without at least one or two people tagging my Twitter page with a question like that. And when they do, it’s because they’re watching one of six episodes from Season 2: “The Lateness of the Hour”, “The Night of the Meek”, “The Whole Truth”, “Twenty Two”, “Static” or “Long Distance Call”. 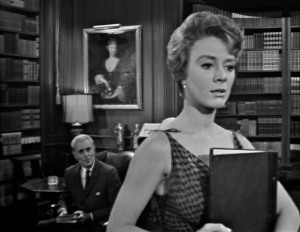 The reason they “look funny”? They were videotaped, not filmed.

Why? Let’s turn to the oracle we all use at some point when we’re doing “research” — Wikipedia. Its entry for “The Whole Truth” notes: END_OF_DOCUMENT_TOKEN_TO_BE_REPLACED

Serling’s “Requiem for a Heavyweight”: A Knock-Out

When we think of The Twilight Zone, we naturally picture alien contact, time travel and other mind-bending occurrences. But if TZ offered little more than weirdness, would it have become such a classic? Would we be eagerly watching marathons decades later?

I don’t think so. A crucial element beats beneath its supernatural surface, one that helped make it a legend: a heartfelt concern for the little people.

Think of Henry Bemis, the mild-mannered bank teller who just wants time to read. Or Al Denton, the alcoholic gunslinger tormented by memories of a lethal shootout. Or Henry Corwin, the sad-sack Santa who longs to help the people in his poverty-stricken neighborhood.

The list goes on, but they all started with a man who made his debut on Playhouse 90 on October 11, 1956: Harlan “Mountain” McClintock.

Mountain takes center stage in “Requiem for a Heavyweight,” a live TV play that earned Rod Serling his second Emmy. “Patterns” had turned him into the proverbial overnight success, but a few middling follow-up dramas left some critics wondering if he was a flash in the pan. “Requiem” proved he was no one-hit wonder. END_OF_DOCUMENT_TOKEN_TO_BE_REPLACED