It’s one of the most vital aspects of any movie or TV show, and one of the easiest to overlook: the score.

Music can make or break a film. Alfred Hitchcock, for example, had planned for the shower scene in “Psycho” to be silent (save for the sounds of running water and Marion’s screams) … until Bernard Herrmann played his iconic shrieking violins for the Master of Suspense, who agreed that it greatly enhanced its effectiveness.

Herrmann’s talents also made their way to the small screen. The legendary composer wrote scores for seven episodes of The Twilight Zone (and his musical cues were recycled in many others), including one that leads many top 10 lists: Serling’s bittersweet masterpiece “Walking Distance.” END_OF_DOCUMENT_TOKEN_TO_BE_REPLACED

Finding Fright in the Fifth Dimension: Some TZs That Are Perfect for Halloween

It’s a Halloween staple that ranks right up there with spooking trick-or-treaters, carving pumpkins and wearing outlandish costumes: watching a scary-movie marathon.

But in an age of digital streaming and high-quality DVDs and Blu-rays, why limit yourself to movies? Why not program a few chills right from the fifth dimension?

True, The Twilight Zone is generally considered a science-fiction series (although I think it’s so unique that it defies easy classification). And yes, the stories dreamed up by Rod Serling, Richard Matheson, Charles Beaumont and other TZ writers were usually designed more to intrigue and edify than to disorient or frighten viewers.

But every now and then, the series gave us some old-fashioned scary moments that might cause even your favorite vampire to glance over his shoulder. So here, in the spirit of October 31st, are 13 Twilight Zones that may make you think twice about turning out the light: 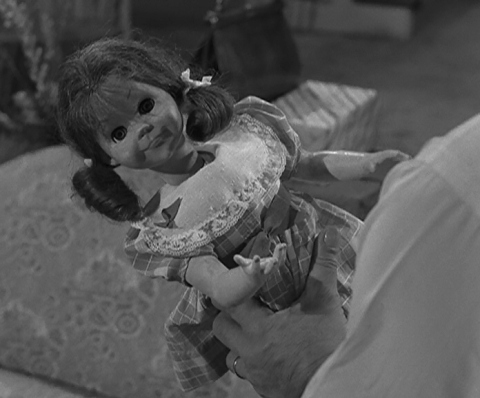 Some tips for those who find themselves near Talky Tina: If she says she hates you, don’t laugh at her. If she threatens you, don’t mock her. Erich Streator (a pre-Kojak Telly Savalas) did, only to discover that Tina is very serious about protecting her young owner. DEADLY serious. Beaumont (aided by an uncredited Jerry Sohl) gives us a creepy tale that does to dolls what Hitchcock did to birds. END_OF_DOCUMENT_TOKEN_TO_BE_REPLACED

A Flight from Fear

“I was on an airplane. I looked out the window and thought, ‘Jeez, what if I saw a guy out there?” — Richard Matheson, writer of “Nightmare at 20,000 Feet”

Easy to say, sure. And why should they believe me? What I’m saying would sound crazy if the most sane man on the face of the earth said it. And I’m far from that. 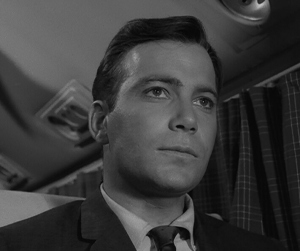 See, I had a little breakdown a while back. Spent some time in the Waldorf for wackos. Recovered nicely. The doctor said I was cured, my wife came to get me, I boarded the plane … which was probably a mistake. I mean, this happened before on a plane.

But face your fears, right? Get back up on that horse, they say. So I did. I boarded the plane. We took off. Then I looked out the window. And I saw …

I saw a man. On the wing. END_OF_DOCUMENT_TOKEN_TO_BE_REPLACED

The Twilight Zone without Rod Serling’s voice? Unimaginable. Yet it almost happened.

It was only at the last minute that Serling stepped in and recorded the narration that would introduce millions of viewers to that elusive fifth dimension. Up until then, it was going to be Westbrook Van Voorhis, a very well-known announcer at the time. Oh, and there was an extra dimension:

I said, “Rod, what is the fifth one?” He said, “I don’t know. Aren’t there five?” I said, “I can only think of four.” So we rewrote and rerecorded it and said, “There is a fifth dimension beyond that which is known to man…”