To millions of Twilight Zone fans, Billy Mumy will forever be Anthony Fremont, the freckle-faced, pint-sized monster sending people to – gulp – the cornfield.

Many also recall him as the little boy whose grandmother phones from beyond the grave in “Long Distance Call”, or as “that kid from Lost in Space”. And I don’t blame them. Mumy certainly left his mark on some legendary roles.

It’s a shame, though, that they tend to overshadow his work on Serling’s “In Praise of Pip”, which first aired on September 27, 1963. The Season 5 opener is a sad but quietly beautiful portrait of love, regret, and second chances. END_OF_DOCUMENT_TOKEN_TO_BE_REPLACED

“The Arrival”: A Twilight Zone Episode on Auto-Pilot

An airplane taxis down the runway, pulls up to its marker, and stops. Perfect landing.

Well, it would have been perfect if anyone, including a pilot, had been on board. The plane is completely empty. You see, this is The Twilight Zone, and you’re watching Rod Serling’s “The Arrival”.

Things look very odd. And they’re about to get a whole lot odder. 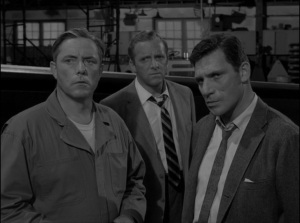 Opinions vary widely on Serling’s first episode of Season 3. Some people like it a lot. Others find it a mish-mash of strangeness, more mystified than mystifying. END_OF_DOCUMENT_TOKEN_TO_BE_REPLACED

As someone who runs a Twitter page that quotes The Twilight Zone daily, I shouldn’t be a fan of “Two”, should I? The Season 3 opener, after all, is largely silent.

On the contrary. I may not place it in my top 25, but I actually rate it quite highly. For an episode that doesn’t have much to say, “Two” says a lot.

It’s anti-war, but not in a preachy, haranguing way. It’s a quiet look at the futility of engaging in an all-out nuclear holocaust with people who, in the end, are a lot like us. And by not shouting, it conveys that idea more powerfully. Writer-director Montgomery Pittman, who also did “The Grave” and “The Last Rites of Jeff Myrtlebank”, deserves a lot of credit. 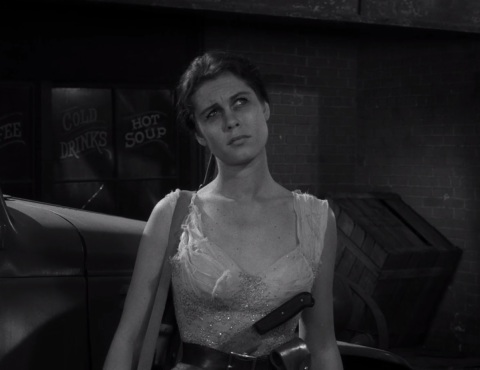 “Two” is a marvel of set design. True, TZ crew members had the good fortune to film it at the Hal Roach Studio (home of the Little Rascals), which was already abandoned and decaying. But they still needed to create the illusion of years of neglect, and they did it perfectly. END_OF_DOCUMENT_TOKEN_TO_BE_REPLACED

How to Keep The Howling Man From Escaping

If the Devil were trapped and asked you to set him free, would you do it? Of course not, you reply.

But what if he were disguised as a man, and a very sympathetic man at that? Doesn’t matter, you answer. You’d see right through him. 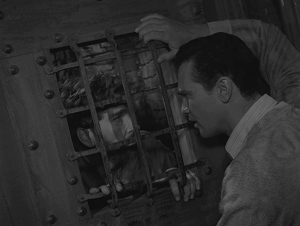 We all like to think we would. But if you’re a Twilight Zone fan, and you’ve watched the classic episode “The Howling Man,” you may not be so sure. Get too cocky, and you could wind up sprawled on the floor, watching him escape through the nearest window.

That was Mr. Ellington’s fate. He didn’t believe Brother Jerome, who insisted that the prisoner was a liar. He probably thought, like any of us would, that he was too smart to be deceived.

So what did he do wrong? Having watched the episode  once or twice, I think I know. And I have Marc Scott Zicree to thank for it. END_OF_DOCUMENT_TOKEN_TO_BE_REPLACED