Time Enough at Last: “The One That Haunts People”

Of all the episodes of The Twilight Zone, perhaps none has left more of a mark on viewers than “Time Enough at Last.” The episode that struck fear in the hearts of book-lovers everywhere — and inspired horrified glasses-wearers to opt for a back-up pair — turns 55 today. 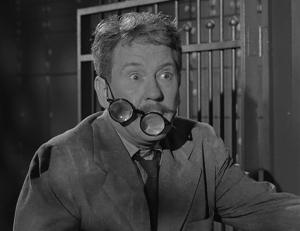 In a 1984 article for Twilight Zone magazine, star Burgess Meredith recalled how the episode excited writer Rod Serling himself:

He had just seen some rushes of the show, which made him very enthusiastic. He said, ‘Hey, you’re wonderful. Let’s do more shows with you.’ After that, Rod wrote a Twilight Zone for me each season. Our relationship wound up lasting a long time. And of course, later in our careers, we both did a lot of voice-over work.

Not quite EACH season, as it turns out. Meredith did “Time Enough at Last” in the first season, “Mr. Dingle, The Strong” and “The Obsolete Man” in the second, and “Printer’s Devil” in the fourth. But the fact remains that Serling clearly enjoyed writing for this talented man. END_OF_DOCUMENT_TOKEN_TO_BE_REPLACED

The Case for Conformity

Most people can decide for themselves whether or not to watch an address by the head of their country. The unfortunate residents of The Twilight Zone‘s “Eye of the Beholder” aren’t so lucky. 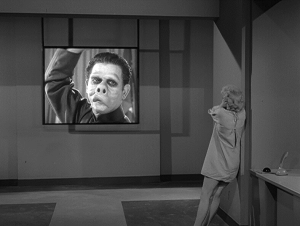 I’ve described in a previous post why I consider this Rod Serling’s finest work. But on this 54th anniversary of the episode’s first airing, I wanted to highlight the full address given by “Leader” in the climatic scene.

We hear some of it as poor Janet Tyler is trying to run away. But we miss most of it, and believe me, it’s worth quoting in full: END_OF_DOCUMENT_TOKEN_TO_BE_REPLACED

It’s Election Day, and I’m here to ask you to pick between a couple of dummies.

Oh, wait — this has nothing to do with the people running for office in your state or county. But I can understand the confusion! No, I’m asking you to pick your favorite of the two ventriloquist dummies that appeared on The Twilight Zone.

On the one hand, we have Willie. Likes: eye tests, dancing girls, upstaging his partner. Dislikes: rival dummies, being locked in a trunk. He starred with Cliff Robertson in “The Dummy.”

On the other hand, we have Caesar. Likes: pacing, larceny, talking to people like they’re idiots. Dislikes: dimwits, nosy club owners. He starred with Jackie Cooper in “Caesar and Me.” END_OF_DOCUMENT_TOKEN_TO_BE_REPLACED

The boundaries of the Twilight Zone may be limitless, but the same can’t be said for a TV show. Rod Serling, like any other writer, had to edit himself.

That wasn’t the case, however, when he introduced “It’s a Good Life.” When it premiered on November 3, 1961, viewers were treated to a monologue at least three times longer than the average TZ intro:

Tonight’s story on The Twilight Zone is somewhat unique and calls for a different kind of introduction. This, as you may recognize, is a map of the United States, and there’s a little town there called Peaksville.

morning not too long ago, the rest of the world disappeared and Peaksville was left all alone. Its inhabitants were never sure whether the world was destroyed and only Peaksville left untouched or whether the village had somehow been taken away. END_OF_DOCUMENT_TOKEN_TO_BE_REPLACED