Serling’s Re-Zoning Efforts: “What You Need”

It’s another rain-soaked night in town, and the usual clientele is hanging out at the Del Rio bar. The unlucky and the lovelorn are in their spots, chain-smoking and drowning their sorrows, when in walks an old man carrying a peddler’s tray.

But he’s not here to sell you just anything. This stranger claims to know what you need, not what you think you want. And whatever it happens to be, he’s offering it free of charge.

Pedott wasn’t the only one with this ability. His creator, Rod Serling, could look at a short story and know exactly what he had to do to turn it into a compelling TV story. And in the case of Lewis Padgett’s “What You Need”, he understood what was required to make it work for The Twilight Zone.

If you’ve read the entry for this episode in Marc Zicree’s The Twilight Zone Companion, you may recall that the original story “concerned a scientist who invented a machine that read people’s probable futures and who then gave them what they needed to be guided in a certain direction.”

True enough, but — as I’ve discovered in looking more closely at several other episodes that Serling adapted from the work of other writers — it’s interesting to look at what he kept and what he discarded. He retained a bit more than just the basic idea, as we’ll see. Overall, though, his changes were fairly substantial. END_OF_DOCUMENT_TOKEN_TO_BE_REPLACED

Finding Food in the Fifth Dimension: A TZ Diner Tour

If someone suggested taking a trip to the Twilight Zone, even the most diehard fan would hesitate. You mean that distorted landscape inhabited by pig-faced people, hungry aliens, and homicidal dolls? Um, hard pass on that idea.

Hold on, though. What if your trip was limited to one of the fifth dimension’s eating establishments? That’s right, I’m talking about that culinary mainstay of mid-20th century cuisine: the good ol’ American diner.

After all, The Twilight Zone began with one. The first shot of the pilot episode, “Where is Everybody?”, shows Mike Ferris walking along a dirt road. His first stop? An unnamed café.

Just check out that interior design. It screams classic, unassuming diner. I can smell the coffee and bacon already.

Naturally, there are fresh pies. A diner without pies is like a Twilight Zone episode without a twist ending.

But although it all looks inviting, the jukebox is loaded with peppy tunes, and Mike has $2.85 to spend (at a time when coffee cost 10 cents a cup), the service and the company at the “Cafe” leaves something to be desired. So let’s diner-crawl to a place all TZ fans know and love: the Busy Bee from “Nick of Time”. END_OF_DOCUMENT_TOKEN_TO_BE_REPLACED

Tags: A Hundred Yards Over the Rim, Nick of Time, The Prime Mover, Twilight Zone, Walking Distance, Where Is Everybody?, Will the Real Martian Please Stand Up?

Twilight Zone Streaming: Going with the Flow or Headed for the Rocks?

If you’re a fan of vintage TV shows and you subscribe to a streaming service, life is a bit like being in a “Friday the 13th” movie: You know just about everyone is going to get it — the only question is when. 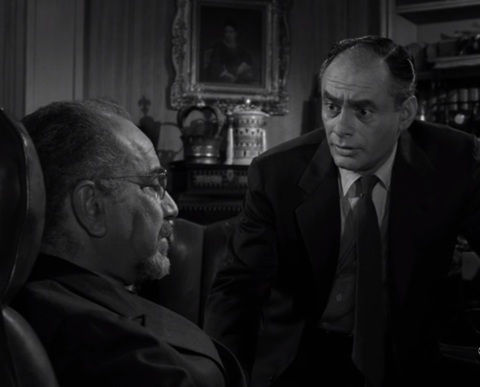 Still, it hurts when your favorites leave. In the last week alone, I’ve seen The Outer Limits (the original and the ‘90s reboot) depart Hulu, while The Andy Griffith Show has disappeared from Netflix.

Both are included in Amazon Prime, fortunately, so I have a fallback. But even Prime has disappointed me lately. It was carrying the first season of Night Gallery (all three seasons of which used to be on Hulu until early 2019), but now even that’s gone.

A couple of other favorites, meanwhile, have gone from being free for Prime members to being something you have to pay extra for.

There are still some great old shows streaming on all three services, particularly on Hulu and Prime. And of course The Twilight Zone is on all three.

The question is, how long will it remain? I don’t know the answer to that, so I’m writing today to say that if you enjoy TZ on any streaming service, don’t take it for granted. END_OF_DOCUMENT_TOKEN_TO_BE_REPLACED