Black and White Vs. Color: Creating that “Twilight Zone Feeling”

Almost as soon as Jordan Peele’s Twilight Zone reboot was announced, some fans began asking, “Do you think they’ll film it in black and white?”

I didn’t blame them for wondering, though it seemed like a very remote possibility. Sure enough, the series debuted in color. And yet, as the first season of the reboot draws to a close, what do we have? All 10 episodes also available to watch in B&W.

It’s a cool little gift to the show’s fans, no question. And it reminded me how lucky we are that the original series was filmed that way.

That’s right — lucky. The fact that the original Twilight Zone is in black and white wasn’t part of some master plan. In 1959, all TV shows were in B&W.

TZ stands out today, of course, in large part because its reruns look so different from the color shows around it. But back then, being a black-and-white show was commonplace. I’m sure that if color had been the standard when TZ first aired, it would have been in color, too. END_OF_DOCUMENT_TOKEN_TO_BE_REPLACED

Tags: black and white, Execution, Jordan Peele, Rod Serling, The After-Hours, The Four of Us Are Dying, Twilight Zone

Catching “The Fever”: Where Serling Got The Idea

So many memorable stories begin in a writer’s mind with a simple question: “What if … ?”

Ideas can come from anywhere — something you read, something you hear, or something you experience. The difference between the writer and the rest of us is pushing beyond the moment and asking that crucial question.

Richard Matheson, for example, did it with “Little Girl Lost” when his young daughter rolled out of bed in the middle of the night. And Rod Serling did it with “The Fever”. (Spoilers ahead, naturally.) 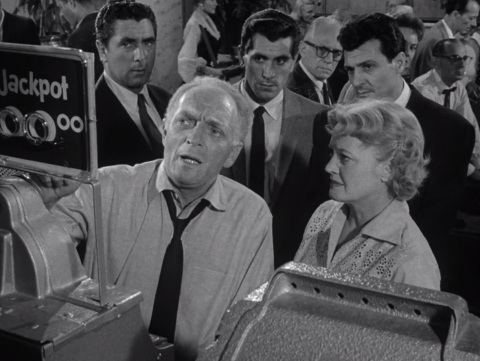