But I’ve never written one about George Clayton Johnson. And now the news of his death at 86 is making me wish I had done so much sooner.

True, I did spotlight one of his wonderful TZ episodes before now, “A Game of Pool” (twice, in fact – here and here). But no post yet about “Nothing in the Dark”? “Kick the Can”? “A Penny For Your Thoughts”? There’s hardly a Twilight Zone fan out there who doesn’t list at least one of those classics among his favorite episodes. END_OF_DOCUMENT_TOKEN_TO_BE_REPLACED

Tags: A Game of Pool, A Penny For Your Thoughts, Execution, George Clayton Johnson, Kick the Can, Nothing in the Dark, The Four of Us Are Dying

Why CBS Finally Took a Gamble on Twilight Zone

Imagine you found yourself transported back in time to December 6, 1941. It’s the day before Japan bombed the U.S. naval base at Pearl Harbor in Hawaii. 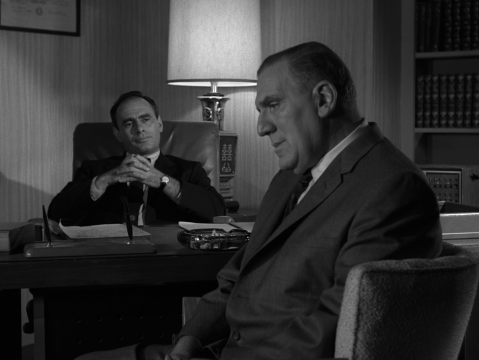 There you are, near the attack site, surrounded by people who have no idea what the next day will bring. Can you warn them without sounding crazy?

That’s the dilemma Pete Jenson faces. He’s been dreaming every night that he’s back there … only it’s not a dream, he tells his psychiatrist. He’s really going back.

Sound like a plot stolen from a Twilight Zone episode? Not exactly. I’m describing “The Time Element”, an episode of CBS’s Desilu Playhouse. It aired on November 24, 1958, the year before TZ debuted. And it was written by Rod Serling. END_OF_DOCUMENT_TOKEN_TO_BE_REPLACED