← The Lost Art of Aging Not-So-Gracefully
Shatner vs. Shatner →

“The place is Heaven. The time is now. And the pool game we’re about to witness will take place between two gifted performers who once starred in a classic episode … of the Twilight Zone.”

It’s not hard to imagine, is it?

Yes, the news that Jonathan Winters died today can’t help but make us feel a little sad. A man who brought laughter to millions has told his last joke. That it comes so soon after the death of Jack Klugman, his co-star in “A Game of Pool“, only magnifies our sense of loss.

But as my TZ-like opening suggests, maybe the show isn’t over. Perhaps Winters is sharing stories right now with many of the talented actors and actresses that he worked with over the years. Seeing him on a billowing cloud at the start of his Twilight Zone episode suddenly seems more fitting than ever.

Surprisingly, Winters was not the first choice for the role of Fats Brown. Topping the list: Jackie Gleason, who had starred as Minnesota Fats in the 1961 movie “The Hustler.” Gleason was already known as a comedian who could turn in an utterly believeable dramatic performance. But Jonathan Winters? 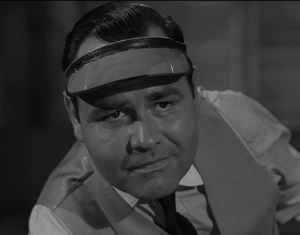 According to the episode’s director, Buzz Kulik:

With a guy like Jack Klugman, you go out and get Jack Warden [star of TZ’s “The Lonely”] or somebody like that. However, we determined that here was this guy who was such a brilliant talent, who would bring a kind of freshness, because this was his first time as a dramatic actor.

Adding to the challenge: Winters was starring opposite an actor already well-known for dramatic roles (who would, in an ironic twist, go on to star in one of television’s great comedy series, “The Odd Couple”). Klugman had already appeared in the film version of “12 Angry Men,” in fact, and had done numerous live television dramas, including a live teleplay by Rod Serling, “The Velvet Alley”. Winters, by contrast, was best known at that time for a series of classic comedy albums. His main role on those? Sweet, tart-tongued Maude Frickert.

Yet Winters proved to be every bit Klugman’s match. A two-man show filled with sharp dialogue and a low-simmering tension,  “A Game of Pool” recalls many of that era’s film noir classics. And it works because both Klugman and Winters bring such life to writer George Clayton Johnson’s cautionary tale about the price of wanting to be the best — and what it may cost. When Winters, as Fats, tells Klugman’s Jesse Cardiff that the stakes are “life or death,” we believe it.

Johnson was among those pleasantly surprised by how Winters rose to the material:

I was astonished at how straight he played it. I expected him to do some little take somewhere in the midst of it that would let you know that he knew that you knew about his whole schtick, and he sort of modulated down from that.

Most people who see the episode, of course, are well aware that Winters is a famous comedian, and so his turn as a serious actor surprises them. But anyone, I think, who saw the episode without knowing of his comic abilities would probably find it hard to believe he wasn’t primarily a serious actor.

That’s not to say there wasn’t plenty of humor on the set, however. Adds Buzz Kulik:

He was very anxious to do this well, and yet he was kind of embarrassed because he felt, ‘My God, here are all these professional people, this crew and cast, and here I am’. And not only did he have to work his dialogue, but he had to play pool! So whenever he’d blow a line or make a mistake, in order to cover his embarrassment, he would go on for like 10, 15 minutes, in the character, doing some of the wildest, funniest, most marvelous things you’d ever seen.

Klugman certainly enjoyed the experience. “John and I got along so beautifully,” he said, “and in between takes, he would tell jokes, and I would be cracking up on the set.”

Winters himself was proud of the role:

It was a very good script. I was so fortunate to play Fats. They play that episode on holidays on television marathons. I have been told that it is considered one of the best of the series. I was never offered many serious roles. Always comedy because I was labeled a comedian. So when the part opened, I was very happy.

As is any Twilight Zone fan who has enjoyed this classic episode. Many people include it among their top 10 episodes. Winters is a big part of the reason why.

Now he’s left us, perhaps to enjoy a rematch with Klugman. He’s gone, but he’s not forgotten. As Fats once said:

“As long as people talk about you, you’re not really dead. As long as they speak your name, you continue. A legend doesn’t die just because the man does.”

Photos courtesy of Wendy Brydge. For a daily dose of Serling, you can follow me on Twitter, Facebook or Pinterest. You can also sign up for email notifications of future blog posts by clicking “follow” in the upper left-hand corner of this page. Hope to see you in some corner of the fifth dimension soon!

← The Lost Art of Aging Not-So-Gracefully
Shatner vs. Shatner →