For our next stop in this “cavern of canvasses,” we move over to the gardening section and meet an unusual lady. As Rod Serling puts it:

For the horticulturists amongst you, here’s a dandy. A lady who plants things, and then steps back and watches them grow. Roses, rhododendron, tulips. And things never before to be found coming out of the ground — just put in. The subject of this painting has green fingers.

Even the most casual Night Gallery fans tend to remember this one. And how could they not? I mean, you’ve got Elsa Lanchester, decades after she starred as the “Bride of Frankenstein,” playing Lydia Bowen, an elderly woman with an eerily unnatural gift when it comes to gardening.

(Spoilers ahead, naturally, so if you haven’t seen the episode before, you may want to check it out on DVD before coming back.)

We meet Mrs. Bowen as she’s outside her house one day, tending to her numerous plants. In an inspired touch, we hear a harpsichord playing “Greensleeves.” Two cars pull up, and out of the more expensive one steps a wealthy land developer named Michael Saunders, played by character actor Cameron Mitchell (who would later star in Season 3’s “Finnegan’s Flight” with Burgess Meredith). It quickly becomes obvious, as he talks with his assistant, Ernie, that he’s a rather unscrupulous individual determined to get Mrs. Bowen’s land and raze her house for a huge factory he’s building.

END_OF_DOCUMENT_TOKEN_TO_BE_REPLACED

For a long time, I had nothing hopeful to say when Night Gallery fans would ask me if we’d ever see a Blu-ray release of the series.

I’d tell them how long it took for it to come out on DVD, and say we were lucky to have it on disc at all. MAYBE we’ll see a Blu-ray someday, I’d add, but don’t hold your breath.

Then Season 1 came out on Blu-ray last November.

This is terrific news for a couple reasons. One is that Season 2 marks when the series went to a weekly format, so you get a lot more material. Many of the show’s finest segments aired in Season 2, like “Class of ’99” with Vincent Price, “Cool Air,” “A Death in the Family” and “Green Fingers.”

The other reason is that Kino Lorber has really packed this one with extras. Besides the cleaned-up video and audio, we get audio commentaries on every episode, not the half dozen or so we got on the Season 2 DVDs. I’m especially glad to see so many by Scott Skelton and Jim Benson, co-authors of “Rod Serling’s Night Gallery: An After-Hours Tour” (which will soon be released in an expanded and revised edition).

END_OF_DOCUMENT_TOKEN_TO_BE_REPLACED

Night Gallery Headed for a Blu-ray Release at Last

I remember when I first saw Rod Serling’s Night Gallery in its original form. Not the exact date, no, but the year: 2004. That’s when NBC Universal issued Season 1 on DVD.

Until then, Gallery fans had only one choice: the reruns that aired on Syfy (and elsewhere) in the 1980s and ’90s. They were larded with commercials, of course, but worse, they were part of the Syndication Edit. I have a link at the end to explain what I mean by that, but the upshot is that the Night Gallery I’d been watching until 2004 was a poor substitute for the episodes that first aired between 1969 and 1973.

Season 1 is the shortest, though: only six hour-long episodes. Sure, the DVD set included the pilot movie — and Universal tried to pad it out further by including a couple “bonus” episodes from Seasons 2 and 3 — but we’re still not talking a LOT of entertainment. And it lacked any other extras: no interviews, documentaries, or commentaries. So I was really looking forward to Season 2 coming out.

END_OF_DOCUMENT_TOKEN_TO_BE_REPLACED

It’s been a long time coming, Night Gallery fans, but “Rod Serling’s Night Gallery: The Art of Darkness” — an oversized volume containing high-quality reproductions of all the show’s paintings — is finally here.

Regular readers of this blog have heard me talk about it before, both in a preview post last May, and in a post about how it was available to order a few months later. The book finally started rolling off the presses late last year. It took a while for it to get out — the pandemic did no one any favors, of course — but as anyone who’s received their copy can tell you, it was well worth the wait.

I recently asked co-author and Night Gallery expert Scott Skelton if he could join me for a short Q&A about the book. Scott, you may recall, joined me for a presentation at the 2019 Serling Fest, where we marked the 50th anniversary of the original Night Gallery movie. Here’s our conversation:

Paul: So the book is out and in just about everyone’s hands at last. Are you happy with how it turned out? From the outside, it looks like it was a bigger success than you were anticipating.

Scott: We’re all very pleased with the quality of the book, how well-designed it is, how respectful it is of the artistry that went into the making of these paintings. It surpasses many coffee-table art books I’ve seen in its savvy design and high publishing standards. Then again, almost all of us involved were die-hard fans of the show and its artwork, and Taylor White, the publisher, was the biggest fan of all. He spared no expense in creating this volume.

END_OF_DOCUMENT_TOKEN_TO_BE_REPLACED

“These aren’t your ordinary canvases. You don’t find Monet in a mausoleum or van Gogh in a graveyard.” — Rod Serling, introducing an episode of Night Gallery

There’s some serious Serling understatement. The paintings shown before each story on Night Gallery were anything but ordinary. This was no school trip to the Metropolitan Museum of Art, believe me.

Even when the segment was so-so, the canvases were cool. What a treat it would’ve been to take a personal tour, the way our self-described “little ol’ curator” did each week.

That isn’t possible, unfortunately, but you can enjoy the next best thing by getting a copy of the forthcoming book I described in a post last May: “Rod Serling’s Night Gallery: The Art of Darkness”. 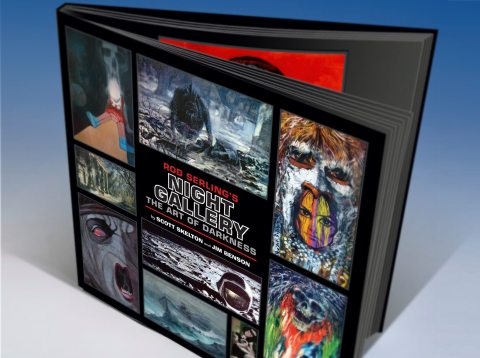 I wish I could say this was something you can order for $30 or so on Amazon. I can’t. It’s a bit pricier than that. I’ll tell you that right up front. But considering the incredible amount of work that went into it, as the authors painstakingly tracked down the many paintings that had been lost, to photograph and reproduce them in the highest-quality detail imaginable, it’s hard to deny that the higher cost is justified.

As co-author Scott Skelton put in on the book’s official Facebook page: END_OF_DOCUMENT_TOKEN_TO_BE_REPLACED

Even if you’re not a big fan of “Rod Serling’s Night Gallery”, you have to admit: The gallery concept was pretty cool.

Watching our host walk among these bizarre canvases and shadowed sculptures as he introduces each story is a great framing device. It’s enough to make you wish there really was such a place.

There isn’t, of course, but I’m happy to tell you that we’ll soon be able to enjoy the next best thing: a glossy, hard-cover volume with high-quality reproductions of every painting that appeared on the show (and even a few that didn’t).

Titled “Rod Serling’s Night Gallery — The Art of Darkness”, it’s coming to us from Scott Skelton and Jim Benson, the same duo who over 20 years ago brought us the definitive behind-the-scenes book on the series, “Rod Serling’s Night Gallery: An After-Hours Tour“. Every work that artists Tom Wright and Jeroslav Gebr created is included. END_OF_DOCUMENT_TOKEN_TO_BE_REPLACED