Looking Into “The Mirror”

When Peter Falk died, I wrote a quick “RIP” post to note the passing of a beloved and memorable actor. I also said that I would soon review his one Twilight Zone, “The Mirror.” Well, the occasion of its 50th anniversary seems an apt time to do that.

Quick recap: The story centers around a Fidel Castro-like character named Ramos Clemente. Having deposed his country’s previous rulers, he’s all set to enjoy the fruits of power – only to discover, by means of a special looking glass, that he’s surrounded by friends who are only too willing to depose him to gain his vaunted position at the top.

Despite Falk’s presence, “The Mirror” tends to get so-so reviews. Even fans who like it put it in the middle of the pack. True, there’s much to like, such as Falk’s muscular performance and Serling’s legendary ability to turn a phrase. But it’s stagey, with the action taking place in one room. Plus, as Serling expert Tony Albarella has noted, it’s hardly plausible that Clemente’s allies would turn on him that quickly (though he notes that Serling’s original script calls for a month-long timeframe, which would make more sense.) It lacks the subtlety of some of Serling’s earlier episodes. END_OF_DOCUMENT_TOKEN_TO_BE_REPLACED

He’ll always be remembered as Lt. Columbo, but Peter Falk did some terrific work in a number of movies over the years. He also guest-starred in several TV shows, including one we all know and love: The Twilight Zone. 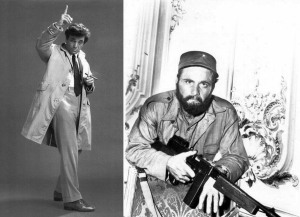 Falk plays a banana-republic revolutionary (with a strong resemblance to Fidel Castro) in a Season 3 episode called “The Mirror.” It’s no Zone classic, but it doesn’t deserve to be entirely dismissed, as some critics suggest. I hope to post a review soon, but in the meantime, here’s the episode itself. RIP, Mr. Falk.

You can also get email notifications of future posts by entering your address under “Follow S&S Via Email” on the upper left-hand side of this post. WordPress members can also hit “follow” at the top of this page.