To millions of Twilight Zone fans, Billy Mumy will forever be Anthony Fremont, the freckle-faced, pint-sized monster sending people to – gulp – the cornfield. 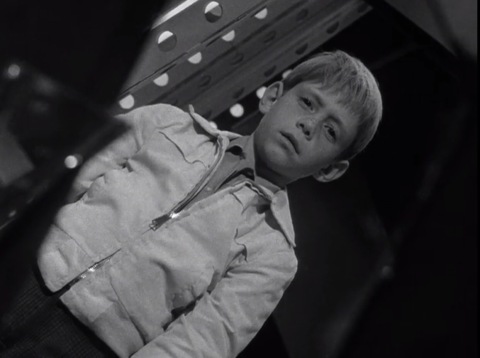 Many also recall him as the little boy whose grandmother phones from beyond the grave in “Long Distance Call”, or as “that kid from Lost in Space”. And I don’t blame them. Mumy certainly left his mark on some legendary roles.

It’s a shame, though, that they tend to overshadow his work on Serling’s “In Praise of Pip”, which first aired on September 27, 1963. The Season 5 opener is a sad but quietly beautiful portrait of love, regret, and second chances. END_OF_DOCUMENT_TOKEN_TO_BE_REPLACED

Finding a Second Chance in the Fifth Dimension

Few Twilight Zone fans are surprised to see episodes like “Nick of Time” and “Eye of the Beholder” on my personal top 10 list. But “A Passage for Trumpet”? Where did that come from?

Not a typical favorite, to be sure. But the part of my brain that enjoys homicidal dolls and dystopian futures sits right next to a strong sentimental streak. In short, I love the redemptive side of TZ.

Something about seeing some poor individual who thinks his existence is pointless learning that he has worth and value really touches my heart. You can bet a marathon programmed by me would include “The Changing of the Guard”, “Night of the Meek” and “Mr. Denton on Doomsday.”

“A Passage for Trumpet” certainly falls into this category. So I wanted to take a moment to highlight it before World Suicide Prevention Month comes to a close. END_OF_DOCUMENT_TOKEN_TO_BE_REPLACED

“The place is Heaven. The time is now. And the pool game we’re about to witness will take place between two gifted performers who once starred in a classic episode … of the Twilight Zone.”

It’s not hard to imagine, is it? 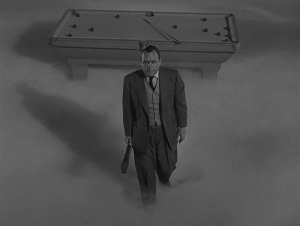 Yes, the news that Jonathan Winters died today can’t help but make us feel a little sad. A man who brought laughter to millions has told his last joke. That it comes so soon after the death of Jack Klugman, his co-star in “A Game of Pool“, only magnifies our sense of loss.

But as my TZ-like opening suggests, maybe the show isn’t over. Perhaps Winters is sharing stories right now with many of the talented actors and actresses that he worked with over the years. Seeing him on a billowing cloud at the start of his Twilight Zone episode suddenly seems more fitting than ever. END_OF_DOCUMENT_TOKEN_TO_BE_REPLACED

In Praise of Jack

The stars in the fifth dimension dimmed a bit tonight with the sad news that Jack Klugman had died.

Klugman was such a gifted and versatile actor, in fact, that his four appearances on The Twilight Zone are not even his most famous roles. He’ll forever be known for two other TV characters: sloppy sportswriter Oscar Madison on The Odd Couple, and as a sleuthing coroner on Quincy, M.E.

But there isn’t a Twilight Zone fan out there who heard the news about Klugman’s passing and didn’t think of “A Passage for Trumpet“, “A Game of Pool“, “Death Ship” and “In Praise of Pip”.

He wasn’t classically handsome and had none of the usual “leading man” characteristics. He didn’t need them. His richly appealing “everyman” persona never failed to draw viewers in. You immediately liked and trusted him. What better qualifications could one need to take a plunge into the far corners of the fifth dimension? END_OF_DOCUMENT_TOKEN_TO_BE_REPLACED

It was one of Jonathan Winters’ best roles — and he played it straight as an arrow. Talk about The Twilight Zone.

The episode was “A Game of Pool.” It also starred Jack Klugman, who would eventually appear in four episodes (a streak matched by Burgess Meredith, another Zone veteran). Seeing Winters and Klugman act and react in this two-man, one-set show gives this episode special appeal. 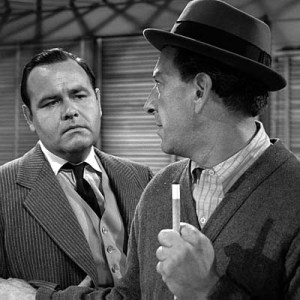 Having a terrific script helps. Good Zone eps always boiled down to the writing. An intriguing story, cleverly written and engagingly acted — a formula that’s simple to understand, but hard to execute. In this case, it wasn’t Rod Serling but George Clayton Johnson (“Kick the Can,” “Nothing in the Dark,” among others) who wrote the words.

But that doesn’t mean he was wild about ALL the words that wound up in the final product. END_OF_DOCUMENT_TOKEN_TO_BE_REPLACED