“It’s an adaptation of what has been called one of the most terrifying modern fantasies ever written.” — Rod Serling on “It’s a Good Life”

One key to being a good editor is knowing what to change — and what to leave alone. Change for the sake of change is a rookie mistake.

Rod Serling knew that well. When he bought the rights to a story for use on The Twilight Zone, he did exactly what was necessary to make it work for television. No more, no less.

Sometimes — as with “And When the Sky Was Opened” and “The Four of Us Are Dying” — that meant making some pretty drastic changes. Other times — with, say, “To Serve Man” — he presented the written story a bit more faithfully.

In the case of Jerome Bixby’s “It’s a Good Life”, it was more than a bit. Bixby had already provided a very visual story, so Serling transferred much of what we find on the page to the screen.

But he did make a few interesting changes. END_OF_DOCUMENT_TOKEN_TO_BE_REPLACED

“Light and Shadow”: A Look at Twilight Zone’s Directors

“The Twilight Zone will be directed, written, produced, and acted by television’s elite.” —Serling before TZ premiered

I focus heavily here on the writing of Rod Serling and other talented authors — and rightly so. Their imaginative scripts were the launching pad for some of the most memorable and timeless television ever filmed.

But you need more than that to create a Twilight Zone episode. To truly bring the fifth dimension to life, you need first-rate actors in front of the camera, and a top-notch crew behind it.

I couldn’t help reflecting on the crucial role played by the head of that crew, the director, when I heard that James Sheldon had died on March 12. His many credits include six TZ episodes, three of which are bona fide fan favorites: “A Penny For Your Thoughts”, “Long Distance Call” and “It’s a Good Life“.* END_OF_DOCUMENT_TOKEN_TO_BE_REPLACED

The boundaries of the Twilight Zone may be limitless, but the same can’t be said for a TV show. Rod Serling, like any other writer, had to edit himself. 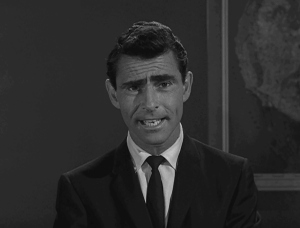 That wasn’t the case, however, when he introduced “It’s a Good Life.” When it premiered on November 3, 1961, viewers were treated to a monologue at least three times longer than the average TZ intro:

Tonight’s story on The Twilight Zone is somewhat unique and calls for a different kind of introduction. This, as you may recognize, is a map of the United States, and there’s a little town there called Peaksville.

morning not too long ago, the rest of the world disappeared and Peaksville was left all alone. Its inhabitants were never sure whether the world was destroyed and only Peaksville left untouched or whether the village had somehow been taken away. END_OF_DOCUMENT_TOKEN_TO_BE_REPLACED