Space travel, as any Twilight Zone fan can tell you, obviously held keen interest for Rod Serling. Stories about what would happen if we went Up There, or aliens came Down Here, cropped up throughout the entire run of the hit series. 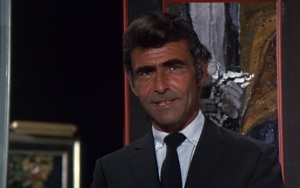 Tantalizingly enough, Serling’s plans for Season 6 pointedly mentioned his interest in featuring more outer-space tales. Alas, it was never to be. And by the time man landed on the moon in 1969, Serling was focused on bringing a trilogy of horror stories to TV. Only one teleplay in the entire run of “Rod Serling’s Night Gallery” dealt with space travel.

So a nice surprise awaited me several years ago when I bought a used copy of the first “Night Gallery” book (“Night Gallery 2” followed a year later). Then out of print, this paperback boasted prose versions of some of Serling’s screenplays from the first season, so I was naturally eager to see how he transitioned them to the printed page. END_OF_DOCUMENT_TOKEN_TO_BE_REPLACED

Tags: Apollo 11, Does the Name Grimsby Mean Anything to You?, Night Gallery, Rod Serling