← Night Gallery’s “Class of ’99”: Serling’s Chilling Examination of Prejudice
Twilight Zone Streaming: Going with the Flow or Headed for the Rocks? →

Today’s post concerns a Twilight Zone episode that is absolutely legendary: “Time Enough at Last”. That’s right, the one about Henry Bemis and his all-too-fragile eyeglasses.

But I’m not writing simply to get some cheap clicks, although I’ll gladly accept them. No, I’m writing to set the record straight about poor Henry.

You may be thinking: “Set what record straight?” If so, you’re probably like most fans, who realize that our mild-mannered protagonist merits our sympathy.

Well, this may surprise you, but some fans don’t feel that way. They think Henry deserves that awful ending.

No exaggeration. Amid the chorus of pity I usually hear when I post something about this episode, a dissenting voice or two arises: someone who doesn’t feel sorry for Henry at all.

Why? Because of his anti-social behavior, they say. Henry didn’t care about humanity, so when he got his heart’s delight, karma bit him in the hindquarters. Serves you right, bookworm!

Whoa, whoa, WHOA. And whoa again. I must protest.

I’m not saying that Henry has no faults. But anti-social? If the first part of the episode portrayed him as a solitary grouch, trying to shut himself away, unwilling to treat others pleasantly, I’d agree. But he doesn’t. Every time he gets a chance, he opens up.

He doesn’t sneer when the lady at the bank interrupts his book. No, he starts excitedly describing characters and scenes. He wants to bond with another person. But she doesn’t even feign interest for the sake of politeness. She just wants to finish her transaction and go. 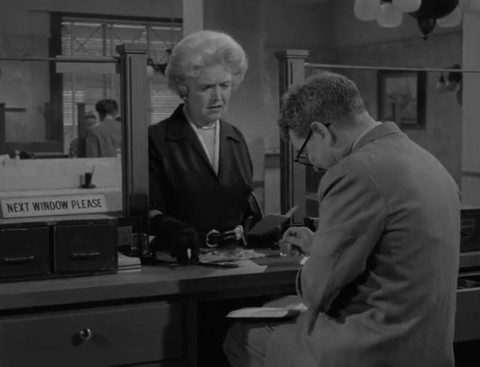 No, she shouldn’t be expected to stop and debate the pros and cons of “David Copperfield” for the next 20 minutes. And no, Henry is not a model employee. But anti-social? Hardly.

This carries over to his next two conversations. When his boss, Mr. Carswell, chastises him for being distracted during his work hours (and rightly so), he doesn’t get angry or shut down. He speaks right up, explaining that his wife’s aversion to reading at home has made him desperate.

That doesn’t mean he should be careless in his duties, but again we see Henry being anything but anti-social. Mr. Carswell even has to suppress a smile as Henry talks on and on, trying to defend himself. 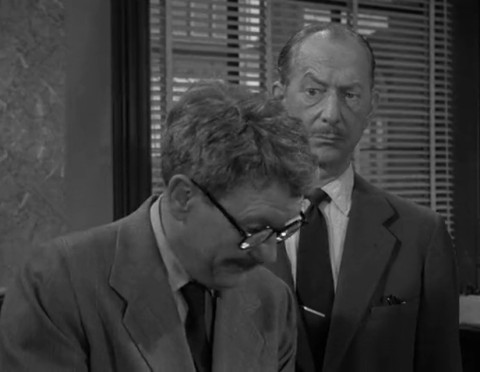 Then we see him with his wife, and we know what a sweetheart she is. Even if Henry is prone to overindulge in the printed word, do we get the sense that he can get any reading in? It seems she won’t even compromise on the subject.

And what happens when she fakes interest in Henry’s volume of poetry? Does her allegedly anti-social husband snatch the book from her hands and find a quiet place to read alone? No. He’s elated. He lights up and starts talking about all the things he can’t wait to read to her. How does she respond? By taking the book she’s already defaced and gleefully ripping the pages out in front of him.

If these encounters typify the kind of reception Henry gets on a daily basis, I’m hardly going to chide the poor man for being overjoyed at the prospect of some uninterrupted reading time. 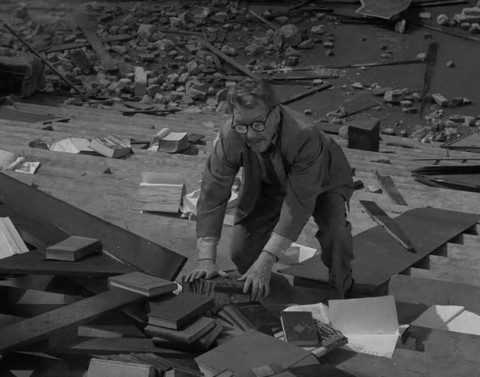 Even before we get to that point, we see Henry upset that the bomb blast has deprived him of human company. He looks all over for people, even though he apparently had no one who treated him kindly. He looks stricken at the realization that Helen is gone. We even hear him calling for her: “Helen?! Where are you?!”

But yes, he loves books. Too much? Maybe. But I think most of us have something we enjoy – a hobby, an activity, or something that brightens up our lives. What’s wrong with that?

Sometimes those are the things that get us through life. Henry, let’s not forget, was on the verge of suicide when he caught sight of that wrecked library. The thought of being able to read again saved his life.

So no, I’ll never be convinced that Henry’s a bad guy. And I’ll never understand why some fans want to throw the book at him.

← Night Gallery’s “Class of ’99”: Serling’s Chilling Examination of Prejudice
Twilight Zone Streaming: Going with the Flow or Headed for the Rocks? →