← Breaking “The Silence”: Serling Almost Ended This Episode Very Differently
Tommy From “The Monsters Are Due On Maple Street” Looks Back on a TZ Classic →

Night Gallery’s “The Devil is Not Mocked”

Where would the horror genre be without vampires and werewolves? And where would World War II stories be without Nazis? They’re staples of many chilling accounts.

Ah, but what if you could combine them all in one story? It wouldn’t have to be anything too ambitious or sprawling. One tight little tale might do the trick.

Perhaps that thought is what prompted American writer Manly Wade Wellman (1903-1986) to pen a story called “The Devil is Not Mocked”. Night Gallery fans will likely recognize the name, as it was adapted during the second season into one of the show’s more memorable short segments. 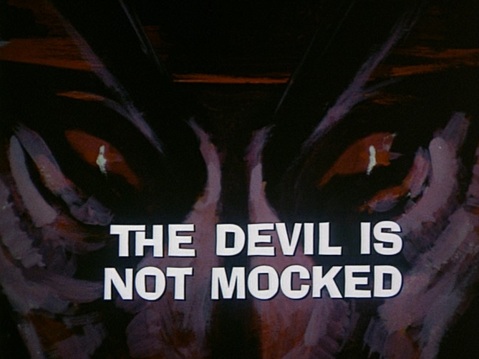 (If you don’t want the story spoiled, maybe bookmark this page before checking it out on NBC.com or on DVD? I’ll be here when you come back.)

Wellman opens with a Nazi commander, General von Grunn (played by Helmut Dantine), being driven along a road in the Balkan countryside, en route to a castle that he’s been told is the headquarters of a secret resistance movement. (I love some of the cars they had in the late 1930s/early 1940s. The godforsaken Nazis did NOT deserve such fine automobiles.) He and his troops plan to take over the castle and convince the inhabitants that their rebellion is futile.

The television version begins with a different scene entirely. Gallery scribe Gene Kearney starts with a man (played by Francis Lederer) talking to his grandson. He tells the boy he’s going to relate what he did during the great world war: “For while many are the terrible charges made against our ancestors, let no man deny our patriotism.” The scene shifts, and we’re with von Grunn, moving along the road.

The Nazis arrive and, well, do the typical Nazi thing: Demand entry at gunpoint, strut around like kings, and treat the natives with contempt. But what’s this? The Count who owns the castle (Lederer’s character, seen now in his younger days) comes out and welcomes them like a happy host. He appears to take no umbrage at their insults and aggression.

Indeed, he has a feast laid out for them. He offers them accommodations and says his servants are at their disposal. Von Grunn is suspicious and condescending, always ready to sneer at their so-called “primitive customs”, but he finally relaxes — at least a little bit — and eats.

No, the food isn’t poisoned. The Nazis, though, probably would have preferred that to what does happen. For the Count has been keeping a close eye on the clock. And once it hits midnight, a terrible commotion erupts elsewhere in the castle: sounds of snarling, scuffling, tearing — and screams. The Nazis begin shooting, but, the Count tells von Grunn, since their bullets aren’t made of silver, they’re “useless”.

Because the servants are actually werewolves. And, von Grunn is told, “this is the headquarters of the secret resistance, and I am its proud commander, Count Dracula”.

He closes in on von Grunn, who is wide-eyed with fear, and the scene changes again, back to the cozy domestic scene the segment began with. “And that, dear child,” the Count tells his grandson, gesturing toward a medal displayed over the fireplace, “is how your grandfather served his country in the great war.”

That framing device is the only real point of difference between the page and the screen. It would be fine without it, but I like how it gives a nice little touch of irony to the story. When you’re seeing the segment for the first time, it seems as if you’re meeting an ordinary man, but by the time we return to him and his grandson, and he flashes his sharpened fangs, we realize this is a far cry from the more Norman Rockwell-esque scene we thought we were witnessing.

The short story is still worth checking out, though, despite the general faithfulness of the filmed version. Wellman weaves a genuinely creepy atmosphere. I particularly liked this description, which wasn’t seen in the Night Gallery version: “The courtyard was full of wolves, feeding. One glance was enough to show what they fed on. As von Grunn stared, the wolves lifted their heads and stared back. He saw many green-glowing eyes, level, hard, hungry, many grinning mouths with pointed teeth — the eyes and the teeth of the steward.”

We may have been denied a chance to see those glowing eyes on the small screen, but we do get to see one of Von Grunn’s bloodied staffers come bursting in the room, only to be dragged away by an unseen predator, clawing helplessly at the floor. 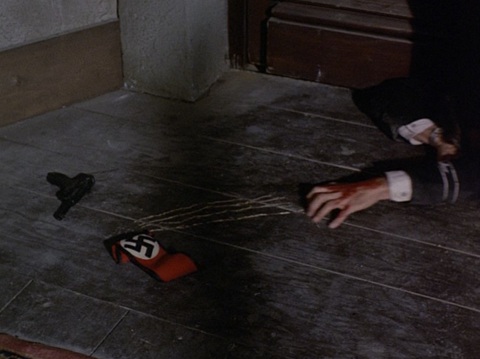 Incidentally, if you’re a Rod Serling fan, this probably isn’t the first time you’ve encountered a Wellman tale. The Twilight Zone episode “Still Valley” (Season 3) was also based on one of his stories. He obviously liked to write engaging short fiction with a dose of the occult.

Not to mention making readers wish there really had been a special squad of vampires and werewolves to unleash on the Nazis. Their “patriotism” would certainly have come in handy. 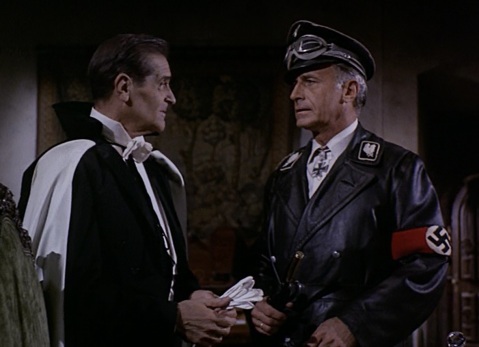 You can read Wellman’s story online here, or treat yourself to a collection of his stories here. The Night Gallery segment is on NBC.com and on DVD.

← Breaking “The Silence”: Serling Almost Ended This Episode Very Differently
Tommy From “The Monsters Are Due On Maple Street” Looks Back on a TZ Classic →