Spotlight on Season 4: “Passage on the Lady Anne”

The usual criticism of Twilight Zone‘s 4th season is familiar to most fans: Stretching the series from a half-hour to an hour meant bloat. Something was lost. Suddenly more added up to less.

Sure, the series still brought us the elements of fantasy that had served it so well throughout the first three seasons: time travel, space travel, horror, and loads of irony. But the extra length mean the writers inevitably drifted more toward drama. Instead of snap, there was sag.

But hey, we’re still talking about the amazing Twilight Zone. And we continued getting stories from Rod Serling, Charles Beaumont, and Richard Matheson. So we may have been denied the classic Zone formula, but we weren’t exactly getting junk.

Freed from the need to sprint to the finish line, the writers had room to explore their themes a bit more deeply. This meant padding at times, but on other occasions, it gave the material a chance to breathe and draw us more deeply into the world of the story.

Take Captain Benteen’s description of Earth in “On Thursday We Leave for Home“. Or Charley Parkes’s heartfelt plea to Alice, the weeping dollhouse inhabitant, in “Miniature“. Or the two long quotes I’d like to highlight today from “Passage on the Lady Anne”.

The script, which Beaumont adapted from his short story “Song for a Lady”, concerns a young couple who, in a last-ditch attempt to salvage their troubled marriage, buy tickets on a trans-Atlantic ocean liner. (Little do they know why the Lady Anne is peopled entirely with elderly passengers, but set that important detail aside for now.) 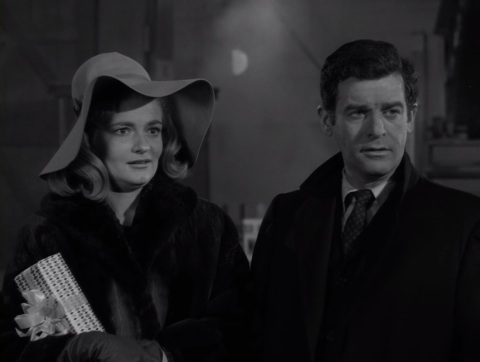 The wife hopes the extra time will help them draw closer together, and Millicent McKenzie (played by Gladys Cooper, who also starred in TZ’s “Nothing in the Dark” and “Night Call”) sets the scene well with this romantic soliloquy:

Love has its own particular point of view. It sees everything larger than life. Nothing is too ornate, too fanciful, too dramatic. Love

demands the theatrical, and then transfigures it. It turns the grotesque into the lovely, as a child does.

With it, we can see what we wish to see in other people. Without it, we can’t see anything at all.

The other, ahem, passage from “Passage” that I always enjoy is from Ian Burgess (Cecil Kellaway, last seen by TZ fans as the robot caretaker in Beaumont’s Season 1 episode “Elegy”) as he laments the pace of the modern world:

People aren’t in their right minds anymore. They sacrifice leisure for speed. And speed’s the only thing that matters.

They’re going to condemn the Lady Anne because she represents a way of life. The old way. She has grace, manners, tradition.

And now they’re going to scrap her.

Nothing is sacred anymore. The beasts are at the gates, but we’re too old to fight, so we have to stand around like pathetic statues, with our medals tarnished and our swords broken, while the vandals turn our castles into sideshows and stick up nasty little advertisements for soap all along the roadside.

And now they’re going to scrap the Lady Anne. But I warn you, how are we going to stop them from scrapping the whole world?

You can enjoy “Passage on the Lady Anne” on DVD and Blu-ray, or stream it on Hulu.