← Serling’s 1972 Speech to Graduates: “Cherish What You Believe”
No Twilight Zone Marathon on July 4th? Say It Ain’t So, Syfy →

No Laughing Matter: Serling’s “The Comedian”

The first time I saw “The Comedian,” I was astonished. 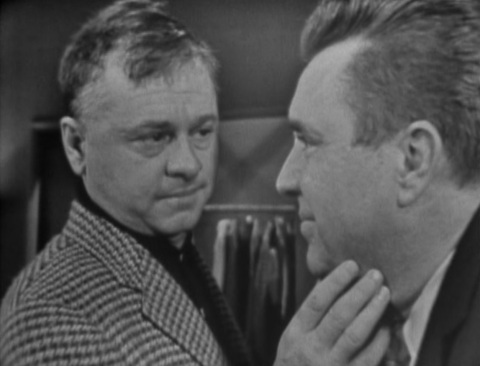 I knew it was one of a trio of works from the early days of live television drama that had earned Rod Serling his first three Emmys. But that was it. An avid Twilight Zone fan, I had watched the live version of “Patterns” (January 12, 1955), then “Requiem for a Heavyweight” (October 11, 1956), and immediately saw themes in these beautiful plays that would later emerge on his signature series.

Then I watched “The Comedian”.

Think Mickey Rooney is on fire in Twilight Zone‘s “The Last Night of a Jockey”? That episode plays like the warm-up act for his off-the-hook performance in “The Comedian” (February 14, 1957). Rooney is Sammy Hogarth, an old-school comic in the style of Milton Berle. He stages big TV specials packed with skits, monologues and musical numbers — and he makes life for his staff and family a living hell.

Those in his immediate orbit are there just to serve him — now — and be grateful for the financial rewards that flow their way. But at what cost? That’s what the story focuses on (the details of which I won’t spoil for those who haven’t watched this remarkable production).

Doesn’t sound like Serling material, does it? And strictly speaking, it isn’t: the future father of the fifth dimension wasn’t writing an original story; he was adapting a novella by storied scriptwriter Ernest Lehman (who would later pen Alfred Hitchcock’s “North By Northwest”).

Riveting character studies, a la “Citizen Kane”, weren’t exactly Serling’s stock-in-trade. And yet it won the aforementioned Emmy. And when, a few years later on an episode of “You Bet Your Life”, Groucho Marx asked Serling to name his favorite works, Serling mentioned “Patterns”, “Requiem” … and “The Comedian”. Nothing from The Twilight Zone, which was then near the end of its 3rd season.

Sure, it may have been the Emmy that prompted him to list it. But I think it was something more. Beneath the cartoonish bluster and theatrical belligerence of Sammy’s antics lies a tale that we can’t tear our eyes from. The question is, why?

It’s not Rooney’s high-octane acting. Nor is it Serling’s sharp ear for dialogue. Both of these elements contribute enormously to the final product, no question. But it’s something more. I think it’s the way “The Comedian” echoes the universal desire to be loved and accepted, even by those who pursue it in the most self-destructive ways possible.

No one, it seems, is immune. Sammy is the most obvious case study, of course, leading to that immortal line from Al Preston, his head writer (played by Edmond O’Brien: “He’s an addict. And the dope he craves doesn’t come in a needle. He needs the adulation of 40 million people!”

But there’s also Al himself, who is pushed so hard to come up with fresh, funny, new material for Sammy’s show that he resorts to stealing skits from another gifted writer (who had died years earlier, leaving some unused grade-A material behind).

There’s Sammy’s brother Lester (played by singer Mel Torme), who’s taken Sammy’s abuse for years. What causes him to finally stand up to Sammy (and then to Al when Sammy won’t listen) and insist that the big star drop a monologue filled with biting jokes at his expense? The fact that Lester’s wife (played by Kim Hunter) is fed up with Sammy’s behavior and is threatening to leave Lester if Sammy doesn’t comply. 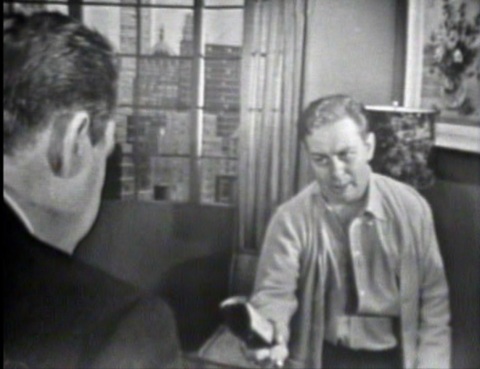 Sammy. Al. Lester. They all have something they crave — respect, love, acceptance. And for it, they’re willing to take increasingly unwise risks.

It was when I saw that that “The Comedian” clicked for me — when its link to Serling’s other works became clear. Suddenly Sammy Hogarth, that sputtering, seething spark plug, made sense. That’s when he took his place among such characters as Requiem’s Mountain McClintock and The Twilight Zone‘s Henry Bemis.

Mind you, “The Comedian” isn’t for all tastes. But I will say this: Every Serling fan should check it out at least once. And who knows? You may find, as I did, that it grows on you with each rewatch.

You’ll also see two future TZ stars: H.M. Wynant (David Ellington in “The Howling Man”) and Constance Ford (Barbara Polk in “Uncle Simon”). Credit should also go to producer Martin Manulis (who had produced “Requiem”) and director John Frankenheimer, who would go on to helm such movies as “The Manchurian Candidate” and Serling’s own “Seven Days in May”.

You can watch “The Comedian” on YouTube or on Amazon Video (free for Prime members). It’s also included on a terrific 3-DVD set from Criterion called “The Golden Age of Television“, along with “Patterns”, “Requiem for a Heavyweight” and several other landmark (non-Serling) productions from the days of live TV.

← Serling’s 1972 Speech to Graduates: “Cherish What You Believe”
No Twilight Zone Marathon on July 4th? Say It Ain’t So, Syfy →