I’m not sure why I’m highlighting this foreward that Rod Serling wrote for cartoonist Johnny Hart. Probably because it’s such a departure from what we normally think of when it comes to our TZ tour guide. It’s neither serious nor spooky — just fun. 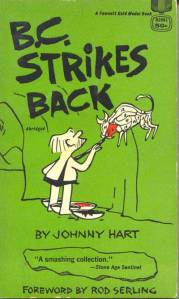 Hart was the creator of the “B.C.” and “Wizard of Id” comic strips, both of which ran for years in many newspapers. Apparently he and Serling were pretty good friends, judging from what Serling wrote for the 1974 paperback collection “B.C. Strikes Back”:

I’ve never written a foreword before for anyone, least of all an elf-like cartoonist with guileless eyes, an ingratiating smile and a capacity for martinis that is astounding considering his size. Precisely why Hart requested this assignment from me is unknown. I rather think it’s because I laugh at his jokes and about one third of the time, I’m able to discern some inner and hidden meanings in his wild, woolly, Left-Bank asides.

There are very few practicing humorists, cartoonists or authors who are willing to take an uncharted dip into a strange pool. To Mr. Hart’s credit everlasting, he’ll swim anywhere, wearing any kind of bathing suit.

To the uninitiated Hart reader, all this will seem pretty meaningless until you read and look at what he’s written and drawn. To the Hart fan, this becomes somewhat redundant because you’ve already become familiar with this imaginative gremlin who makes you look at his pictures twice and reflect on his dialogue at least three times.

It all boils down to this: In the welter of ruttish, threadbare, third-hand humor that we’re exposed to day after day, the freshness of Johnny Hart is an air-conditioning unit in a Bedouin tent on the Sahara. It feels good. And that’s why I’m writing this foreword — as meaningless as it is — for nothing. So just don’t sit there, Johnny Hart, with your leprechaun puss — go ahead and make me laugh!

I have to admit, I find it funny that Serling, who stood 5-foot-4, dropped several jokes about Hart’s size. Then again, that was probably the point. In a world filled with taller individuals, Serling and Hart shared a unique vantage point.

It’s also interesting that Serling not only enjoyed Hart’s humor, but singled out his “boldness” — a quality Serling certainly had in spades. That boldness would later get Hart into hot water when he wrote some religious-themed strips that drew some sharp criticism. But in 1974, “B.C.” was just a fun little strip that obviously had a big fan in Rod Serling.