← “Do You Know Why There’s Night All Around Us?”
Serling’s Re-Zoning Efforts: “Time Enough at Last” →

“Hold On … Is That Van Johnson?” A TZ Disc Mystery

Ever look at something a hundred times, and then — on the 101st — notice something odd? 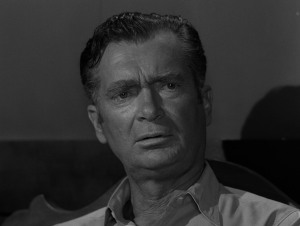 That sounds like the set-up to a Twilight Zone episode, I know. Alas, it’s something a bit more mundane. But stick with me for a couple minutes. This little mystery is a quick one.

Recently, I was pulling out the fourth disc of Season 5 from my boxed set of Twilight Zone DVDs, when my eyes fell on the small picture on the back cover next to “Queen of the Nile”. As you can see, there’s a thumbnail pic beside each title and description. 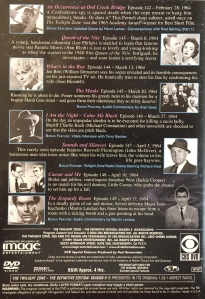 Then I took a closer look. Sure enough, there’s Ann Blyth, the star of the episode. She’s next to … wait, that’s not Lee Phillips, her co-star. That’s … Van Johnson? 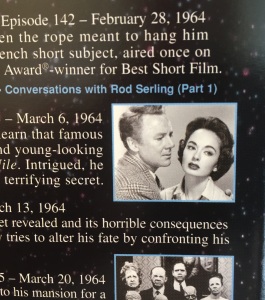 For the record, Van Johnson isn’t in that episode, or any other TZ. Someone in the design department obviously got a little sloppy. Phillips and Johnson don’t even look alike. Phillips has dark hair; Johnson has sandy blonde. Quality Control was clearly out to lunch that day.

I couldn’t help but wonder if Johnson DID star in something with Blyth. A quick Google search, and bingo — they were in a 1957 movie called “Slander”. Wow, off by seven years (or eight, if Wikipedia is to be believed; I went with IMDB). “Queen of the Nile” came out in 1964. Doesn’t anyone check these things?

I looked up “Slander”, and it seems like it was a bit of a dog. Hmm, that co-star of theirs looks familiar … hey, that’s Steve Cochran, the man who bullied poor Ernest Truex in TZ’s “What You Need”!

As if that Zone connection wasn’t enough, I glanced at the rest of the cast list and noticed Harold J. Stone. Stone played the flight investigator in TZ’s “The Arrival”. 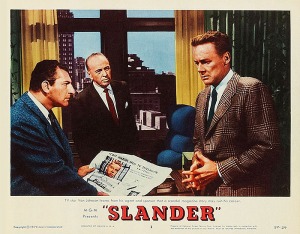 That seems appropriate. Stone’s character was desperately trying to solve the puzzle of how Flight 107 landed with no one aboard. Perhaps he can figure out where the pic of Phillips and Blyth got to.

My suggestion? Try the back cover of the “Slander” DVD.

P.S. I checked my Season 5 Blu-rays, which came out later. Surely it was fixed in the interim. Nope. Same pic. Is anybody paying attention around here? O_o

Posted on 07/15/2016, in Twilight Zone Humor and tagged Ann Blyth, Lee Phillips, Queen of the Nile, The Arrival, Twilight Zone, Van Johnson, What You Need. Bookmark the permalink. 4 Comments.

← “Do You Know Why There’s Night All Around Us?”
Serling’s Re-Zoning Efforts: “Time Enough at Last” →