← “Light and Shadow”: A Look at Twilight Zone’s Directors
10 More Little-Known Facts About The Twilight Zone →

“A Perfect Twilight Zone Opening”: Matheson’s “A World of Difference”

Rod Serling made a point of saying, even before The Twilight Zone debuted, that he wasn’t interested in settling for “second-best”. And it showed. He hired the best people, then turned them loose on some of the best scripts ever to grace the television medium.

I focused in a recent post on the world-class directors who made their mark on TZ. It was hardly an exhaustive piece, but that was by design. You could fill a book with all the marvelous touches these talented visual storytellers brought to TZ.

So I focused primarily on James Sheldon’s work on “It’s a Good Life,” hoping to come back from time to time to spotlight other directorial highlights. Well, the recent anniversary of Richard Matheson‘s “A World of Difference” made me think of another: the shot that reveals to the lead character that he’s an actor on a movie set. 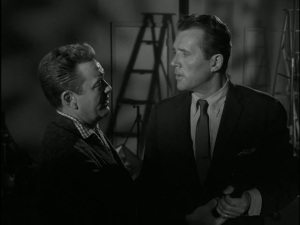 When the episode opens, we see what we think is an ordinary man at his office, finishing up work before heading out on vacation. It all looks pretty normal, until he walks into his office, picks up his phone to place a call, and notices the phone isn’t working. He starts to leave … at which point we hear a man off-screen yell, “Cut!”

Jump-cut to the film crew? Sure, that would have done the job, albeit in a pedestrian way. But director Ted Post had a better idea:

I wanted to do this in one shot. I want Howard Duff first shot as he comes into the office. Gail Kobe is the secretary. He asks for any phone calls, she gives him whatever papers, and then in one shot, I follow him into his office. The desk is on the other end of the stage, and I have him sit into the chair, but as he came in,

I panned him over to the window, and that’s all in one shot. Never did a cut. And then I sit him down at his desk, in one shot. He decides to make a call and picks up the phone. The phone is not working. He tries it again. He gets up, and I have him walk right to the middle of the room and he hears the word “Cut!” and he gets confused. As he turns to the left, my camera goes to the left over his shoulder, and where the window was, there’s a crew. In one shot. 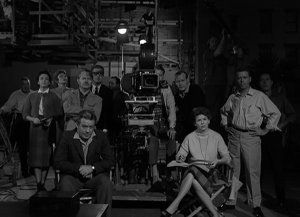 Matheson, who had not written anything to his effect in the script, was suitably impressed: “I love ideas like that. It was a perfect Twilight Zone opening.” He told Post: “You revealed exactly what the character’s problem was. The schizophrenic problem became clear just by a production concept which helped underscore and make that point.”

Creating that shot took some work. The office wall had to be built on wheels that moved silently, then quickly slipped out of the way precisely on cue. But who can argue with the results? 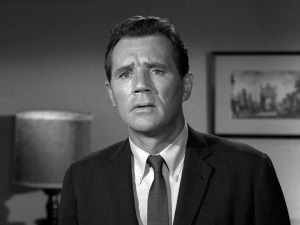 Well, maybe Gerald Raigan would. He was happier being Arthur Curtis, after all. Glad to see he finally got his happy ending … in the Twilight Zone.

← “Light and Shadow”: A Look at Twilight Zone’s Directors
10 More Little-Known Facts About The Twilight Zone →