← Séances and Surrealism: Another Night Gallery Tour
Why CBS Finally Took a Gamble on Twilight Zone →

“The Season To Be Wary”: A Night Gallery Book

In his last interview, Rod Serling said he wanted to be remembered simply as a “writer.” There’s little doubt that he achieved that. Countless authors cite him as one of their primary influences.

Yet nearly all of his fans experience his words via a TV screen, not the printed page. How many of us have enjoyed a book by Serling?

True, that wasn’t his typical medium. He was famous for dictating scripts in a hurry by the poolside, not fiddling with some florid prose in a quiet study. Small wonder that the few books he did author were out of print for years.

That changed in 2014 when Rod Serling Books republished several volumes that almost any fan of the fifth dimension will want to check out. Each one merits its own post, but today I want to focus on one that should interest any Night Gallery aficionado: “The Season To Be Wary.” 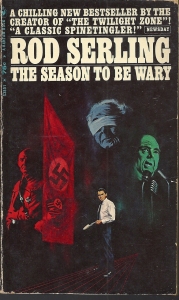 Two of the three stories in this 1967 volume (“Eyes” and “Escape Route”) will be familiar to anyone who’s watched the Night Gallery pilot movie. But they’re still worth reading. Freed from the dictates of a network time schedule, Serling uses his considerable talents to paint more vivid portraits of the key characters, creating a memorable theater of the mind that puts many bestselling authors, past and present, to shame.

Richard Kiley does an excellent job bringing the loathsome Nazi fugitive Joseph Strobe to life. Joan Crawford’s turn as Claudia Menlo, who’s willing to exploit the downtrodden and blackmail the vulnerable to get her way, is equally chilling. Serling’s words, however, add something that can’t be captured by a camera.

You know how his Twilight Zone introductions make the episodes more enjoyable? It’s kind of like that.

But the main draw for Serling fans is the third story, which was never filmed. “Color Scheme”, unlike the other two stories, has its own introduction, which notes that the idea came from Sammy Davis, Jr.

Serling sketches a story about racism in the Jim Crow South, a world in which a white supremacist known as King Connacher preaches undiluted hatred toward people guilty of having a different skin color. Through a Twilight Zone-esque twist, he somehow switches bodies with a black man outraged by a deadly act of arson — a crime inspired by Connacher’s poisonous words.

Only then does Connacher understand the pain and suffering his actions have caused. It’s “Freaky Friday” meets “To Kill a Mockingbird,” ending on a grisly note that punctuates just how unspeakably ugly a world ruled by unreasoning prejudice can be.

“Quick, raw and fiery,” notes one of the book’s blurb reviews. Indeed it is. If you prefer your tales of vengeance straight, no chaser, “The Season To Be Wary” is the book for you.

← Séances and Surrealism: Another Night Gallery Tour
Why CBS Finally Took a Gamble on Twilight Zone →