← Some Fatherly Advice from the Twilight Zone
From Serling With Love: A Spy Series That Never Was →

Space travel, as any Twilight Zone fan can tell you, obviously held keen interest for Rod Serling. Stories about what would happen if we went Up There, or aliens came Down Here, cropped up throughout the entire run of the hit series.

Tantalizingly enough, Serling’s plans for Season 6 pointedly mentioned his interest in featuring more outer-space tales. Alas, it was never to be. And by the time man landed on the moon in 1969, Serling was focused on bringing a trilogy of horror stories to TV. Only one teleplay in the entire run of “Rod Serling’s Night Gallery” dealt with space travel.

So a nice surprise awaited me several years ago when I bought a used copy of the first “Night Gallery” book (“Night Gallery 2” followed a year later). Then out of print, this paperback boasted prose versions of some of Serling’s screenplays from the first season, so I was naturally eager to see how he transitioned them to the printed page. 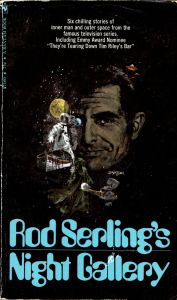 There was “Make Me Laugh”. “Pamela’s Voice”. “The Sole Survivor” (which became “Lone Survivor” when it was filmed). “Clean Kills and Other Trophies”. The Emmy-nominated “They’re Tearing Down Tim Riley’s Bar“. All cropped up in Night Gallery’s short first season.

And there was a story called “Does the Name Grimsby Mean Anything to You?” Which, appropriately enough, did NOT mean anything to me. No such story ever appeared on NG, and it hasn’t been filmed since.

I felt as if I’d discoved a lost episode.

Part of the reason I’ve been thinking about it now is that we recently marked the anniversary of the Apollo 11 moon landing. That’s exactly what the story concerns: the first lunar mission.

Instead of Neil Armstrong, however, Serling gives us Jonathan Evans. A man hailed far and wide for being the first to set foot on the moon. Someone who relives the mission in his dreams every night, only to awaken as he murmurs an unfamiliar name: Grimsby.

Still more mysteriously, the name crops up at the same spot in the dream. He’s on the moon, preparing to lay the mission marker on the lunar surface, when he sees … something. What, he doesn’t know; his memory is blank, despite the vivid details of everything prior to that point. All he has is a name he doesn’t recognize.

I wouldn’t dream of spoiling the story for you. (If it were still out of print, I might clue you in. But it’s only a click away on Amazon, and Serling sets the scene much better than I can.)

But I can tell you this: It was fun having a “lost” Night Gallery unspool in my head. I’ve since purchased an e-copy of the book as well. It’s worth checking out — not only for this story, but to see how Serling fleshed out and tweaked the others. Even if you’ve seen the filmed versions, you’ll make some pleasant discoveries.

It’s intriguing to ponder what Serling would have dreamed up in an age of space stations, twin Earths, and high-def pictures of Pluto. Who better to help us explore, as he said in one of his Night Gallery intros, “some of the question marks that await us in the stars”?

Posted on 07/28/2015, in Night Gallery and tagged Apollo 11, Does the Name Grimsby Mean Anything to You?, Night Gallery, Rod Serling. Bookmark the permalink. 19 Comments.

← Some Fatherly Advice from the Twilight Zone
From Serling With Love: A Spy Series That Never Was →