← “More Than A Man Has Died”: Serling on Kennedy’s Death
Some Fatherly Advice from the Twilight Zone →

Anyone who’s perused my list of least-favorite Twilight Zone episodes knows I don’t really care for “Cavender is Coming,” in which Carol Burnett stars as a bumbling young lady in need of a guardian angel. But I can’t deny the charm of these behind-the-scenes pictures of her with Rod Serling.

I think it’s because they underscore a lesser-known facet of Serling’s personality: his sense of humor. As any TZ fan will tell you, part of the appeal of the series is hearing him, on-screen and off, addressing us in his famous tight-lipped way, grimly confiding the fate of that episode’s protagonist.

He was so chillingly effective at telling us how stories unfolded “… in the Twilight Zone” that it’s easy to be surprised when we learn how much he enjoyed a good joke.

I was struck by this as I read “Dimensions Behind the Twilight Zone” by Stewart Stanyard. It’s filled with interviews of those who worked in front of and behind the camera on TZ, many of whom recall how Serling exuded a positive, almost joyous air. He’s described as intense, to be sure, almost a force of nature at times, but never in a negative way. Indeed, the man who brought us scary stories week after week sounds like someone who was fun to be around.

Not that you don’t see glimpses of Serling smiling here or there on TZ. You see a twinkle in his eye every now and then, especially on the more whimsical episodes. Even so, it’s hard to imagine him kidding around all that much, judging by what we see on screen. 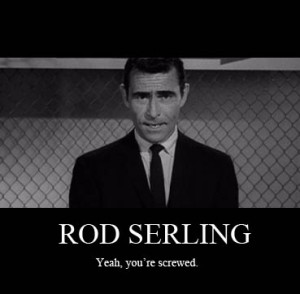 And yet: “Rod was a great fan of comedy, a great, great jokester,” recounts TZ associate producer Del Reisman. “If I would run into him at a café or something, he’d come right up to me and say, ‘Okay, two guys walk into a bar …’ He’d just start.”

Others say something similar to what we hear from Billy Mumy, star of “It’s a Good Life” and two other episodes: “I remember his presence being very relaxing, and I also remember him cracking jokes and being light.” Adds TZ director Richard Bare: “He had a grin a mile wide.” 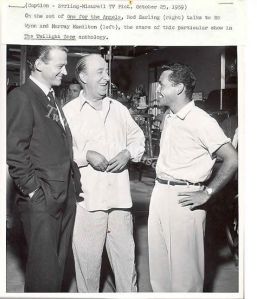 That sounds closer to what daughter Anne Serling writes in her book, “As I Knew Him: My Dad, Rod Serling.” The man she saw on the TV screen, solemnly introducing us to the fifth dimension, appeared miles away from the father she knew — a man who loved to clown around, make faces, come up with silly voices, and join in all manner of mischief.

And if that doesn’t convince you, consider this picture from Anne’s book. “My dad would often appear in goofy costumes, and more than once he put my lampshade on his head,” reads the caption. 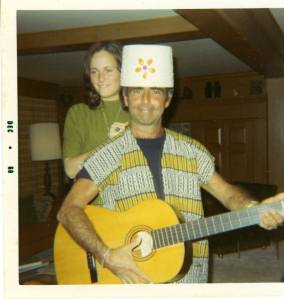 Excuse me? The creator of The Twilight Zone — a man known in the early stages of his career as TV’s “Angry Young Man” — is wearing a LAMPSHADE? We must be in … well, you know.

← “More Than A Man Has Died”: Serling on Kennedy’s Death
Some Fatherly Advice from the Twilight Zone →