A “Christmas Present” For The World

Imagine spending Christmas Day at the hospital. Sounds horrible, doesn’t it? Unless you were Sam and Esther Serling, and you were there on December 25, 1924, to welcome a baby boy into the world. A boy who would someday welcome the rest of us … to the Twilight Zone.

The Serlings already had one son, Robert, born in 1918. But a bout of yellow fever prior to that had almost killed Esther. Anne Serling, author of “As I Knew Him: My Dad, Rod Serling”, picks up the story:

After Bob is born, the doctor gives them the crushing news: this will be their only child. He says it is impossible for her to carry another, and true to his warning, a baby girl is stillborn a few years later. Seven years later, however, the doctor is proven wrong.

December 25th, 1924, Esther and Sam are rushing to the Good Shepherd Hospital. Hurriedly, they call a neighbor to watch Bob. A few hours later, a healthy baby boy is born. They name him Rodman Edward Serling. 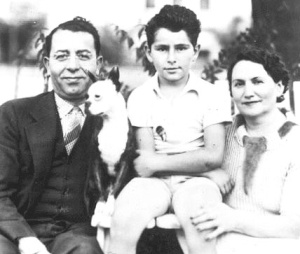 Although Jewish, the family also celebrates Christmas, and my dad will one day say, “I was a Christmas present that was delivered unwrapped.”

Bob does not recall the survival so idyllically. No one has time to put together his new toy, an electric train, that Christmas morning. His parents are still at the hospital, and only a neighbor is there to watch him. He sits on the floor, tears through the red wrapping, and attempts to put the train together himself. He connects the tracks, lines up the engine, baggage car, and two my train passenger cars, but because he doesn’t know what he’s doing, he shoves the rheostat too far, causing the cars to circle too fast, out of control, and they crash.

Bob remembers, ‘My first realization that I had a brother was that I hated the little son of a bitch ’cause he’d wrecked my train’.”

It wasn’t long, however, before the two Serling brothers became close friends. And soon Bob would be sharing that “Christmas present” with the whole world.