Spotlight on Season 4: “On Thursday We Leave For Home”

“The ideal Twilight Zone started with a really smashing idea that hit you in the first few seconds, then you played that out, and had a little flip at the end. That was the structure.” — Richard Matheson (writer of “Nick of Time”, “The Invaders”, and a dozen other TZs)

That structure worked like a charm for four of Twilight Zone’s five seasons. During Season 4, however, it went to an hour, making it virtually impossible to follow the established formula for an “ideal Twilight Zone”. Small wonder that CBS pared it back to a half-hour for the final season. 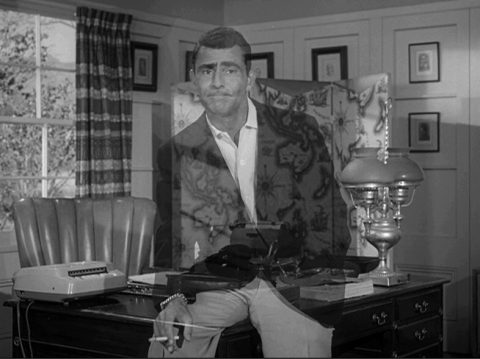 Are you sure you want less of me?

But although the move to an hour did result in some stories that were obviously padded and dramatically flat, some excellent episodes aired that season. Indeed, it showcased some of the finest writing in the entire series.

I highlighted one example last year in a post on Charles Beaumont’s “Miniature”. Now I’d like to do the same for a key scene in Rod Serling’s “On Thursday We Leave For Home”.

The episode focuses on the inhabitants of Earth’s first extra-terrestrial colony in space. They’ve lived on a planet known as V9-Gamma for many years, and they’re tired of trying to scratch out a feeble existence in what turns out to be a rough, barren terrain.

James Whitmore plays Capt. William Benteen, the leader of the group. It’s his job to see that all the many responsibilities for survival are carried out. But Benteen also functions as a kind of unofficial morale officer. He provides some much-needed hope by telling them that they can expect to be rescued soon.

And he tells them about Earth. They’ve been gone so long that many of them barely remember it. Some of the children, who have been born on V-9 Gamma, know nothing of it first-hand.

Listen in as the colonists gather one evening and Benteen tells young Jo-Jo about their home planet:

Benteen: “I remember the Earth. I remember it as a place, a place of color. I remember, Jo-Jo, that in the autumn … the leaves changed, turned different colors: red, orange, gold. I remember streams of water that flowed down hillsides, and the water was sparkling and clear. I remember clouds in the sky: white, billowy things that floated like ships, like sails. You see, in ancient times that’s the way men moved their ships across the water. They unfurled large sections of canvas against the wind, and the wind moved them. And I remember night skies. Night skies. Like endless black velvet, with stars, sometimes a moon, hung as if suspended by wires, lit from inside.”

Benteen: “Night? Night is a quiet time, Jo-Jo, when the Earth went to sleep. Kind of like a cover that it pulled over itself. Not like here, where we have the two suns always shining, always burning. It was darkness, Jo-Jo, darkness that felt like … like a cool hand just brushed past tired eyes. And there was snow on the winter nights. Gossamer stuff. It floated down and covered the Earth, made it all white, cool. And in the mornings we could go out and build a snowman, see our breath in the air. And it was good then. It was right.”

Jo-Jo: “Captain, why did you leave there?”

The other four seasons of Twilight Zone are filled with Serling’s lyrical touches. But only in an hour-long episode could you find a passage like this. The expanded running time gives his writing a chance to breathe, and to enrich the characterization of Benteen as a true father figure to the colony. You don’t have to be told that he fills that role, you can see it … and it makes the final scene even more devastating. 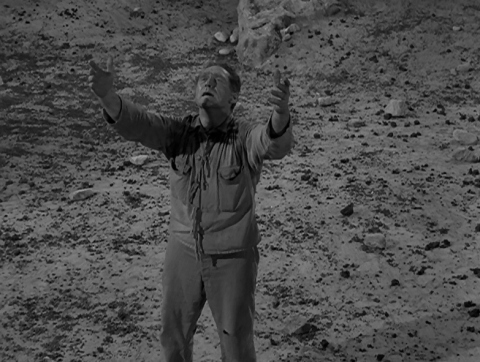 And, at the same time, we can enjoy the beauty of Serling’s writing. Indeed, this passage is enough to make us look at our natural world anew.

“This is what they’ve done for three decades,” Serling says in his opening narration. “Survive. Until the memory of the Earth they came from has become an indistinct and shadowed recollection of another time and another place.”

Thanks to the power of his writing, that memory is anything but “shadowed.”

You can enjoy “On Thursday We Leave For Home” on DVD and Blu-ray, or stream it on Hulu and Amazon Prime.

Posted on 07/31/2013, in Twilight Zone and tagged On Thursday We Leave for Home, Rod Serling, Twilight Zone. Bookmark the permalink. 11 Comments.