Rod Serling, as fans of The Twilight Zone well know, was a master of dialogue. Veteran actors such as Jack Klugman (“A Game of Pool”) often spoke of what a treat it was to act out one of his scripts, which were filled with pithy observations and stinging critiques.

Interesting, then, that he also wrote an episode titled “The Silence.” It concerned a memorable wager: Stay silent for a year, and win $500,000. 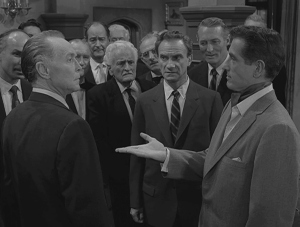 Of course, in real life, the silent treatment isn’t quite as hard to coax from some people. They’ll do it for any number of reasons.

So when the hashtag #ReasonsWeStoppedTalking popped up on Twitter recently, I thought of several TZ-related conditions that might prompt the cold shoulder. I huddled with my intrepid “Gal Friday,” Wendy, and here’s what we came up with:

Posted on 07/12/2013, in General and tagged Twilight Zone. Bookmark the permalink. 8 Comments.