Stopover in a Quiet Blog

“It’s a crazy thing about writers. You tell them you read their stuff, and all of a sudden their hearts stop.” — Rod Serling’s “The Velvet Alley” (1959)

I know that feeling well. Two years ago today, I decided that my Twitter page, @TheNightGallery, wasn’t enough of an outlet for this fan of all things related to Rod Serling and his legendary TV series, The Twilight Zone.

It was time to try my hand at blogging. The result? “Shadow & Substance”.

I wanted to branch out. To dive a little deeper into the reasons that Serling’s entertaining forays into the limitless land of imagination continue to attract viewers decades after they first aired. I couldn’t do that in 140-character bursts.

That meant doing more than quoting all the fan-favorites, as I do daily on Twitter. No, writing a blog meant watching the episodes with a careful and critical eye. It meant thinking about what Serling and the other talented writers who contributed to TZ were trying to say. It meant striving for accuracy and giving readers a reason to keep coming back.

Most of all, it meant putting myself on the line. My analysis. My words. My “stuff.”

Even now, it’s a heart-stopping moment to hear that someone has read a post of mine. And hearing that they’ve enjoyed it? That they’ve even been moved or inspired by it? I might as well be rounding the bases as fans scramble to grab that walk-off home run I just hit. There’s no other feeling like it.

Perhaps most gratifying has been seeing the way the blog has evolved. In the beginning, I was posting pieces that were almost devoid of pictures or artwork of any kind. Sure, I was writing the best posts I could, but handing people a large block of gray text? About a TV show? Even Henry Bemis might balk at reading that.

Presentation matters, too. As the carnival barker showing off Maya the Cat Girl in TZ’s “Perchance to Dream” knew, you need a little salesmanship to get people in the door. That meant finally adding pics to the pic-less posts I had been doing so far.

Then came the breakthrough: a post on my favorite TZ of all time, “Eye of the Beholder.” I published it last November 11, the anniversary of the day it first aired in 1960. I was pleasantly surprised by how well it all turned out. 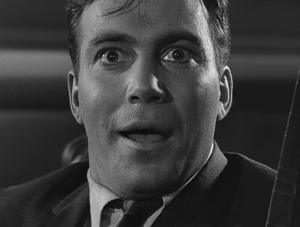 It got even better, though. I was contacted by the WordPress editors, who told me that my post, “Conformity’s Critical Eye“, was being “freshly pressed.” This put it in front of thousands of other bloggers, and my page views — and “fan mail” — skyrocketed. It was a professional triumph and a real thrill.

I’m also proud of how “Shadow & Substance” offers a variety of pieces: long, short, serious, funny. I spotlight Serling’s other works, including “Rod Serling’s Night Gallery,” the anthology series that followed TZ; “The Loner,” Serling’s one-season western; and the live teleplays in the ’50s that made him a household name. I go behind the scenes, feature top-10 lists, and poll readers about their favorite episodes.

What excites me most, though, is knowing there’s so much more to explore. The more I delve into Serling’s works — and my collection of books, screenplays and discs grows all the time — the more I realize how much more there is to examine and enjoy.

So if you’re a fan of this blog, you’ll be happy to know I’m just getting started. There are some great projects and posts ahead for you.

Hope you’ll come along for the ride. As I titled my first blog post two years ago, “there’s the signpost up ahead …”