← Romancing the Zone
The Thread of Imagination →

Fallout at a Funeral

We’ve all heard about weddings that didn’t go off as planned. Funerals, however, tend to be far more predictable.

Unless, of course, they happen in the Twilight Zone. 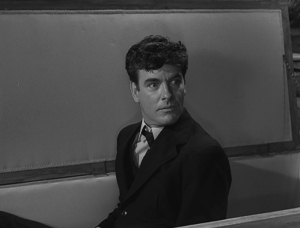 Fifty-one years ago today, Rod Serling brought us the tale of a man who decided to cheat the undertaker in the most dramatic way possible. He opened the lid of his coffin even as the preacher was eulogizing him. The astonished congregation couldn’t have fled the premises more quickly if Satan himself had turned up to demand equal time.

So begins “The Last Rites of Jeff Myrtlebank,” an entertainingly offbeat story set in the midwest of the 1920s. It was written and directed by Montgomery Pittman, who had already — appropriately enough — given us the TZ classic “The Grave.”

You might expect a story that centers on someone coming back from the dead to be serious or macabre. But this is the Twilight Zone, of course, so the usual rules don’t apply. Pittman surprises us with a lightly comic tone that deals not with the mechanics of an unscheduled resurrection, but how people react to it. 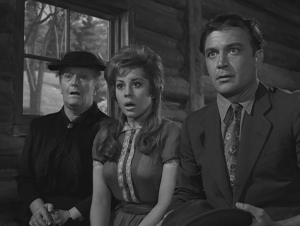 We find Jeff thrilled to be back among the living. His relatives and neighbors, however, move quickly from shock to suspicion. Jeff, they observe, is the same in some ways, but different in others. And even though the changes are hardly negative — he’s become a hard worker, for example, and his appetite is smaller — they quickly show that paranoia isn’t limited to Maple Street. Jeff, in their view, is a “haint”, a wandering demon that takes possession of dead bodies.

“We don’t know who you are or where you come from,” one of the townsfolk tells Jeff when a large group confronts him. “But we figure you stole Jeff’s body. We don’t even like you as a neighbor.” Here the understated humor and the small-town ethos of the episode converge nicely, in a suggestion that Jeff’s main sin is not being the repository of a strange demon, but of being a bad neighbor.

The rumor mill goes into full swing. The town doctor tries desperately to salvage his reputation by detailing all the efforts he made to ensure that Jeff had truly departed the land of the living — even inventing a condition he calls ipso suspendo animatus. “Very rare,” he says. “In fact there’s only been 30 cases in the last 1,500 years.” 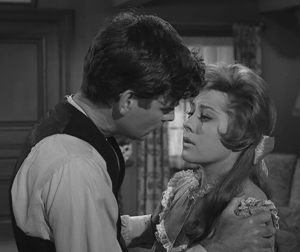 Poor Jeff can’t even relax in the company of his bride-to-be. The ironically-named Comfort has none to offer him, especially after observing the lethal effect he has on a bouquet of freshly picked flowers. Comfort’s brother predicts that their children will be born with horns, and even manages to get on the losing end of a fistfight with Jeff. Since Jeff had always been beaten handily before, this outcome only fuels the haint theory.

Jeff finally puts the townsfolk permanently on the defensive with a memorable lesson in perspective:

We’re going to stay, and that means just two things: One, if you’re wrong about me, then you ain’t got nothing to worry about, because that means I’m just a poor old country boy by the name of Jeff Myrtlebank.

But on the other hand, if you’re right about me, then you better start treating me pretty nice because you just don’t know all the trouble I can cause you. I might wave my right hand and bring a whole grove of locusts down on your crops and wave my left hand and dry up your wells.

Then I might snap my fingers and burn a barn or two. And then some morning if I get up and I feel exceptionally ornery, I might have the hawks come down and steal your chickens. Yes, sir. You better start treating me and mine real nice.

The clearly worried townsfolk nervously assure Jeff that he’s more than welcome. After all, they note, he’s engaged to Comfort (who looks pretty nervous herself). Their forced jocularity (“We’ll picnic that day”, they say of the upcoming wedding date) is one of the episode’s high points.

So does that mean things are left up in the air, in typical TZ style? No firm answer as to whether or not Jeff is, in fact, a haint? Not exactly. Comfort asks if he can, in fact, do all those things he said. No, he insists, as he gets out his pipe. It was just talk. But, she says, he just lit his pipe with a match that appeared to start without being struck on anything.

“Comfort, honey,” he says, “First thing you’ve got to learn is not to imagine things.” A perfect quip for a series that invited us to do just that with every episode.

But it’s Serling who gives us the final wry twist in his closing narration:

Jeff and Comfort are still alive today, and their only son is a United States Senator. He’s noted as an uncommonly shrewd politician, and some believe he must have gotten his education … in the Twilight Zone.

← Romancing the Zone
The Thread of Imagination →