If you’re reading this, the world didn’t end today. Perhaps you knew that, but I thought I’d make sure. Some people might be surprised. 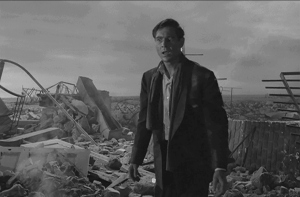 But if it had ended, I’d like to think we all went out doing something we really enjoy. And what would your last day on earth be without a chance to “Zone” out? So I tweeted this question:

Let’s say the Mayan prophecy was right. What Twilight Zone would you watch before the world ended? #TZWorldsEnd

Guess I wasn’t the only one who thought the apocalypse deserved a little TLZ. The responses poured in. So I thought I’d list the episodes that everybody mentioned.

Surprisingly, no fewer than 22 separate episodes were cited, and the votes were really spread out. Here they are in order of popularity, starting with the episode that got the most votes:

Although there was no wrong answer, I was glad to see some people get into the spirit of things by picking an episode with end-of-the-world overtones.

Not that it’s easy to pick just one. Some people gave two or three answers. And then there was this: “I’d make it a Twilight Zone marathon. All the episodes.”

Posted on 12/21/2012, in Twilight Zone and tagged Time Enough at Last, Twilight Zone. Bookmark the permalink. Leave a comment.