← The Plane Truth: Twilight Zone’s High-Flying “King Nine Will Not Return”
Why You Can’t Sleep →

Because many of the hour-long Twilight Zone episodes lack the snap of their half-hour counterparts, they’re often unfairly dismissed. As I’ve pointed out before, though, several of them are quite entertaining. And a few contain some of the finest writing in the series.

One particularly touching moment occurs at the end of Charles Beaumont’s “Miniature.” (As usual: spoilers ahead). Charley Parkes, played by a young Robert Duvall, is convinced that the characters he glimpses inside a large, ornate dollhouse at a local museum are real. He is particularly drawn to Alice, a beautiful woman in Victorian attire. 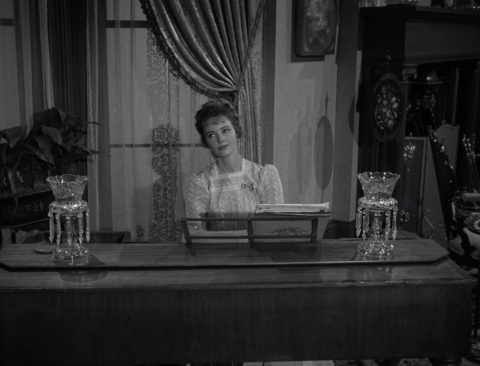 At one point, he’s arrested for trying to break into the dollhouse after witnessing Alice fend off the advances of an unwanted suitor. In an effort to cure Charley, his family has him committed to a rest home. A psychiatrist named Dr. Wallman patiently tries to persuade him that it’s all in his head.

Charley improves — or so it seems — and is released. But it turns out he was faking. He returns to the dollhouse, sees Alice in tears, and says:

They tried to tell me you weren’t real. They tried to make me think you were only something I imagined. Of course, I knew better.

But I pretended to believe them. Because if I hadn’t done that, I’d still be in the hospital. And I never would have seen you again. That would have been terrible.

make you understand that. Maybe if I keep telling you, you will. I love you, Alice. I love you.

Wallman says it happened because I needed a simple world I could understand. But your world isn’t simple, is it? No world with people in it is. There’s always loneliness and suffering and heartache.

Look at you, crying because you’re alone. Well, I’ve been alone all my life. Oh, people have tried. My mother and my sister — they’ve tried very hard to understand, but they can’t. You could. We could understand each other and help each other and love each other.

Who among us can’t identify with Charley’s plea? How deeply we all yearn to be understood, accepted — and loved. It even drives some of us … into the Twilight Zone.

For a daily dose of Serling, you can follow me on Twitter, Facebook or Pinterest. You can also get email notifications of future posts by entering your address under “Follow S&S Via Email” on the upper left-hand side of this post. Hope to see you in some corner of the fifth dimension soon!

← The Plane Truth: Twilight Zone’s High-Flying “King Nine Will Not Return”
Why You Can’t Sleep →