← A Trip Into The Past
The Write Stuff →

“A Death in the Family”

On Sept. 22, 1971, NBC aired the second episode of Night Gallery’s second season. It was a strong hour for the series, anchored by two very effective tales scripted by Rod Serling: “A Death in the Family” with E.G. Marshall, and “Class of ’99” with Vincent Price.

Each deserves its own blog post, so I’ll use this one to highlight a particular aspect of the Marshall segment. If you haven’t watched it before, try the link below. And if you want to avoid spoilers, stop here, and then come back when you’re done. 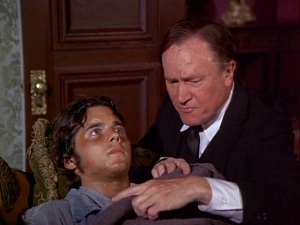 Marshall plays an unusual undertaker named Jared Soames. Like many of us, he pities the cast-off members of society who come through his door for a charity funeral. But unlike many of us, he goes a macabre step further. He adopts those who have no family into his “family” — of corpses. Lovingly preserved, they populate a specially kept room in his basement.

It’s a tribute to Marshall’s acting, and Serling’s writing, that the character of Soames comes off not like some wild-eyed ghoul, but as a sympathetic and gentle individual who genuinely cares for the members of his “family.”

When a desperate fugitive hiding out in the funeral home discovers Soames’ secret, he naturally looks astonished. “They’re dead!” he says when Soames invites him to stay. Soames’ response is worth quoting in full:

For a daily dose of Serling, you can follow me on Twitter, Facebook orPinterest. You can also get email notifications of future posts by entering your address under “Follow S&S Via Email” on the upper left-hand side of this post. Hope to see you in some corner of the fifth dimension soon!

← A Trip Into The Past
The Write Stuff →