Even if your favorite Twilight Zone isn’t “Time Enough at Last,” there’s no denying that it often serves as the iconic tale of the fifth dimension. The image of Henry Bemis facing a future with thousands of books — and no glasses — is a searing one. No list of all-time TZ episodes, it seems, is complete without it. 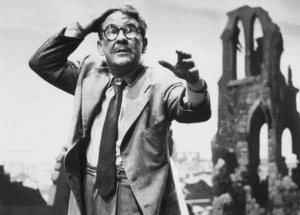 It may be heresy to admit it, but I’ve never felt the ending to it was just. Yes, it’s an all-time classic, and I’m second to none in my admiration for its other aspects: writing, acting, etc. It’s beautifully done — which is one of the reasons it’s so heart-breaking.

But we have two general types of TZ endings: happy ones for good people, unhappy ones for bad people. And I’m not convinced that Henry Bemis got the right one.

After all, what is he being punished for? Sure, he’s withdrawn from humanity and too absorbed in his reading. But is this truly a major defect? And even if it is, it’s surely not one that merits this degree of punishment.

I’ve talked to other TZ fans who say that it’s simply your classic tragedy. Classic literature, from Shakespeare to Steinbeck, is full of it. Sometimes bad things happen to good people.

What do you think? Feel free to sound off below.

Photo courtesy of Wendy Brydge. For a daily dose of Serling, you can follow me on Twitter, Facebook or Pinterest. You can also get email notifications of future posts by entering your address under “Follow S&S Via Email” on the upper left-hand side of this post. Hope to see you in some corner of the fifth dimension soon!