← How the Kanamits Passed the Lie-Detector Test
Storytelling: Then and Now →

George Takei will always be best known for playing Lt. Sulu on Star Trek. But before he ever stepped onto the bridge of the Enterprise, he took a short jaunt into the fifth dimension. 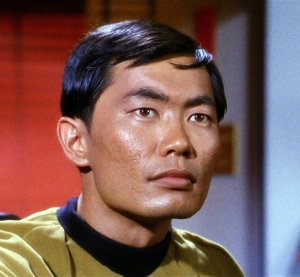 As the Tallahassee Democrat put it in a profile of Takei:

Before “Star Trek” turned him into a star, Takei was a character actor who appeared in small parts in movies and guest roles on TV shows such as “Playhouse 90” and “Perry Mason” during the late ’50s and early ’60s. One of his biggest breaks arrived when he co-starred with Neville Brand in an intense and controversial episode of “The Twilight Zone” called “The Encounter.”

Takei played a Japanese-American groundskeeper named Arthur Takamori who gets into a war of words with a World War II veteran who is rummaging through his attic. The conversation

— which is more like a terse, two-man dialogue written by David Mamet — ends in violence thanks to a cursed samurai sword.

“The Encounter” triggered complaints from Japanese-Americans — it didn’t help that the Vietnamese war in Asia was heating up. The episode became available for viewing again on the DVD set “The Twilight Zone: The Definitive Edition” (2006) and on YouTube.

“It was a marvelous opportunity for a young actor; I really got to tear up some scenery,” Takei laughed.

“I was lucky enough to be there when he did his intros and closes,” Takei said. “He sounded just the same and looked just the same (as he did on TV). But he was very gracious and thanked me for doing such a tough role. I was a great admirer of his writing.”

Serling didn’t write “The Encounter.” It was one of two episodes penned by Martin M. Goldsmith late in the show’s run. (The other was “What’s in the Box.”) It’s no classic, but the acting is solid, and Serling and producer William Froug deserve credit for being willing to explore the then-touchy issue of Japanese-American relations. This episode aired, after all, only 19 years after the end of World War II.

It’s available on the Season 5 DVD and Blu-ray sets, complete with a commentary by Takei. Here’s Takei talking about the episode:

And here’s the full episode:

← How the Kanamits Passed the Lie-Detector Test
Storytelling: Then and Now →