← “A Film Isn’t a Horse Race”
Serling on Film Violence →

It’s a theme that surfaces repeatedly in Rod Serling’s writing. We see it in his teleplays in the 1950s and in episodes of The Twilight Zone (‘60s) and Night Gallery (‘70s). It helped him create some of his best work.

I’m referring to nostalgia. “I have a desperate desire for serene summer nights, merry-go-rounds and nickel ice-cream cones,” Serling told TV Guide in 1972. 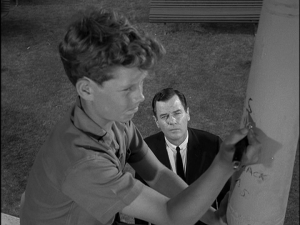 This yearning led to the development of two of his most popular Twilight Zone episodes: “Walking Distance” and “A Stop at Willoughby.” Both came in Season 1. Both feature a harried businessman trying to cope with great stress and a sense of helplessness. Both showcase a longing to escape into the past.

If you’re like most Zone fans, you rate both episodes highly. Pressed to pick a favorite, many opt for “Walking Distance.” But not Serling. Although he seemed pleased with it when it aired, his fondness for it waned as the years went by. “A Stop at Willoughby,” however, he later called his favorite from Season 1.

It wasn’t the theme that bothered him; after all, both episodes are similar in that respect. It was the execution. In a series of college lectures he did later, he picked apart certain scenes, such as the one where Martin Sloane (before he realizes he’s gone back in time) visits his hometown drugstore and orders an ice-cream soda.

Why, Serling wondered, wasn’t the counterman startled when Sloane talks about the drugstore owner as being dead? After all, Mr. Wilson is snoozing away in the back room. But when Sloane says, “One of the memories I have [is] Old Man Wilson, may God rest his soul, sleeping in his big comfortable chair in the other room,” the counterman doesn’t even blink, let alone contradict him.

Serling presumably wrote it that way so that first-time viewers would get a jolt when they see the counterman, after Sloane leaves, go into the back and tell Mr. Wilson they need more chocolate syrup. In retrospect, however, Serling felt that the counterman’s laconic reaction doesn’t hold up on a second viewing (or third — or twelfth, if you’re a diehard fan like so many of us). 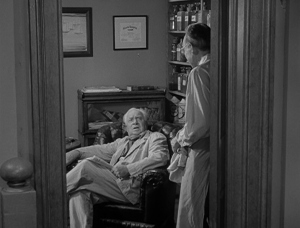 He leveled similar criticism at other scenes, claiming that the characters weren’t acting or reacting realistically given the circumstances. Why didn’t the parents call the cops when an adult male kept coming back and insisting he’s the grown version of their young son? And so on.

Much as I hate to contradict the master, I have to disagree. I don’t mean that his specific criticisms are off base, necessarily, though they do strike me as nitpicking. It’s just that I’d pick “Walking Distance” over “A Stop at Willoughby” (much as I love them both). 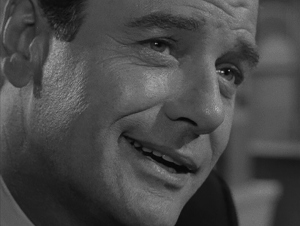 “Willoughby” is terrific, and it has a great twist ending. But Gart Williams yearns for a generic paradise. We can sympathize, to be sure, but his utopia, however attractive, isn’t quite as powerful as a desire to go back home.

We all want to find a place where we can relax and slow down. But stronger still is the hunger to return to our past, find our younger self, and speak a few words of hard-won wisdom — pass along a little perspective. “Martin, I only wanted to tell you that this is a wonderful time of life for you,” the elder Martin tells his younger self. “Don’t let any of it go by without enjoying it.”

Plus, “Walking Distance” has a happy ending (albeit bittersweet). Martin Sloane gets his chance to go back, and returns to the present not only with a limp, but with his father’s advice to look for “band concerts” and other hallmarks of his carefree youth in the here and now. Gart Williams, by contrast, winds up dead.

Yes, we’re given to believe that he’s now happy in Willoughby (a stand-in for heaven, we see), but I can’t help finding the end of “Walking Distance” a bit more satisfying. Maybe because we all want a second chance — a fresh start. Martin Sloane gets that — and the possibility that we could get it too speaks to something deep inside all of us.

And let’s not forget the staging of “Walking Distance” — a stand-out even in a series that was routinely excellent in this department. The photography, the score (by the amazing Bernard Herrmann) and the acting is all world-class.

Then there’s the writing. There’s no better way to conclude than with Serling’s lyrical closing to the episode:

Martin Sloan, age 36, vice-president in charge of media. Successful in most things but not in the one effort that all men try at some time in their lives — trying to go home again. And also like all men perhaps there’ll be an occasion, maybe a summer night sometime, when he’ll look up from what he’s doing and listen to the distant music of a calliope, and hear the voices and the laughter of the people and the places of his past.

And perhaps across his mind there’ll flit a little errant wish, that a man might not have to become old, never outgrow the parks and the merry-go-rounds of his youth. And he’ll smile then too because he’ll know it is just an errant wish, some wisp of memory not too important really, some laughing ghosts that cross a man’s mind, that are a part … of the Twilight Zone.

← “A Film Isn’t a Horse Race”
Serling on Film Violence →