Looking Into “The Mirror”

When Peter Falk died, I wrote a quick “RIP” post to note the passing of a beloved and memorable actor. I also said that I would soon review his one Twilight Zone, “The Mirror.” Well, the occasion of its 50th anniversary seems an apt time to do that.

Quick recap: The story centers around a Fidel Castro-like character named Ramos Clemente. Having deposed his country’s previous rulers, he’s all set to enjoy the fruits of power – only to discover, by means of a special looking glass, that he’s surrounded by friends who are only too willing to depose him to gain his vaunted position at the top.

Despite Falk’s presence, “The Mirror” tends to get so-so reviews. Even fans who like it put it in the middle of the pack. True, there’s much to like, such as Falk’s muscular performance and Serling’s legendary ability to turn a phrase. But it’s stagey, with the action taking place in one room. Plus, as Serling expert Tony Albarella has noted, it’s hardly plausible that Clemente’s allies would turn on him that quickly (though he notes that Serling’s original script calls for a month-long timeframe, which would make more sense.) It lacks the subtlety of some of Serling’s earlier episodes.

Then there’s the political angle. Marc Scott Zicree, in The Twilight Zone Companion, dismisses “The Mirror” as a product of the era’s Cold War mentality. The episode aired, in fact, almost exactly one year before the Cuban missile crisis, but well after Castro (who seized power in 1959) had aligned himself with the Soviet Union.

There’s no question that “The Mirror,” shall we say, reflects its times. Falk’s character may have a different name, but he’s made up to resemble Castro. And Serling, in his closing narration, notes that “any resemblance to tyrants living or dead is hardly coincidental.”

But this episode merits a closer look. Serling isn’t merely taking an easy potshot at a particular world leader. He’s making a larger point about the dark side of power. 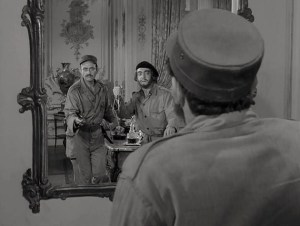 Once you’ve clawed your way to the top, he’s saying, you can’t just sit back and enjoy your wine, as Clemente does briefly at the start of the episode. You’ll still have plenty to worry about, especially if you yield to paranoia, as Clemente obviously does. (Seen this way, in fact, the episode could be taken as a left-wing warning to Castro and not a right-wing prophecy.)

Ask yourself: Does Clemente actually see his enemies in the mirror, plotting his demise? Or is it all in his imagination, planted by the suggestion of his predecessor?

It works either way. If it’s real, we’re dealing with a supernatural object, and that certainly qualifies as the basis for a good Twilight Zone. If it’s just in his mind, we’re left with Serling’s meditation on how power is a double-edged sword.

And that makes for a satisfying story as well. Par for the course in this, the fifth dimension.