← After the Zone-a-thon
Put Up Your “Dukes”: James Best’s Three Twilight Zones →

A Round on the House

Occasionally someone will notice the location I have listed on my Twitter page, “Tim Riley’s Bar,” and ask if Tim Riley is my real name.

It’s not. It’s a reference to one of the most powerful stories to appear on Night Gallery, “They’re Tearing Down Tim Riley’s Bar.” In fact, it’s one of the best things Serling ever wrote — something that even he, his own harshest critic, didn’t bother to deny.

In his last interview, Serling was asked which of his works he particularly liked. He named three: 1) his 1956 Emmy-award winning teleplay “Requiem for a Heavyweight,” 2) one he had just written (“A Stop Along the Way”) and 3) “They’re Tearing Down Tim Riley’s Bar.” He was clearly proud of it — and justifiably so.

If you’ve ever seen Twilight Zone‘s “Walking Distance,” then you have some idea of the territory that Serling mines here. A middle-aged salesman named Randy Lane, played to perfection by William Windom, is marking his 25th anniversary at the plastics company he works for — and trying desperately to battle both loneliness (he’s a widower) and the young, brash assistant who’s gunning for his job. He longs for the old days, when he, his wife and his friends would gather for drinks, music and laughs at Tim Riley’s Bar. 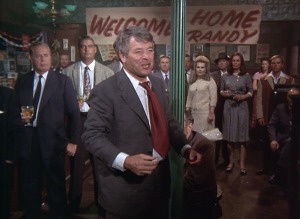 Which, as the title of the story indicates, is now an abandoned building that has a date with the wrecking ball. Randy can’t help but feel it’s a metaphor for his life — and when he starts seeing ghosts from his past, it begins to look as if he’ll retreat completely from the present day. Diane Baker plays Lynn, a sympathetic secretary who tries hard to console him and make him realize that things aren’t as bad as they seem. It’s beautifully done, and ends on a nicely redemptive note.

You can watch “They’re Tearing Down Tim Riley’s Bar” on Hulu. But for a sharper-looking, commercial-free experience, try it on DVD. (Netflix carries it.) It’s the first story on disc 3 of Season 1, and it runs about 40 minutes.

I’ll post a more comprehensive review at a later date, but for now, don’t miss out on one that Serling called “one of my favorites.”

← After the Zone-a-thon
Put Up Your “Dukes”: James Best’s Three Twilight Zones →