SyFy has been showing quite a few Twilight Zone classics, but even a long marathon can’t cover all the best episodes.

Here are five episodes (one from each season) you may want to check out after the Independence Day binge is over. This list is not meant to be all-inclusive — just a sampling of solid stories that didn’t happen to make this year’s cut:

1) Judgment Night (Season 1): A German passenger finds himself aboard a British ship in 1942, with no idea who he is or how he got there. But he gradually realizes that he knows a great deal about the Nazi U-boats patrolling the nearby waters. And why does he feel a great sense of doom about the ship and its passengers? Serling always excelled at stories of divine justice, and “Judgment Night” is a prime example of his talent for tales of chilling vengence.

2) King Nine Will Not Return (Season 2): Capt. James Embry awakens next to his crashed B-25 plane, King Nine, in the desert. He and his men had been conducting World War II bombing runs — but now his crew is nowhere to be found. And why are there modern jets flying overhead? Embry feverishly tries to piece the mystery together. Based on an actual story of a missing plane, this episode showcases a one-man acting tour de force by Robert Cummings.

3) Person or Persons Unknown (Season 3): David Gurney wakes up after he and his wife have thrown a wild party, only to find that everyone he knows — wife, family, co-workers — says they have no idea who he is. Gurney desperate searches for some proof of his identity before they can have him committed. A pure shot of paranoia penned by Zone veteran Charles Beaumont, who specialized in stories of acute disorientation.

4) On Thursday We Leave For Home (Season 4): The first settlement by Earth people of a distant desert planet has proved to be a bust — the land is all but uninhabitable. Capt. Benteen, however, has kept his small band of survivors going for years. But when a ship arrives to take them back home, Benteen finds that he’s not ready to let them go yet. An absorbing meditation by Serling on the use and misuse of power. 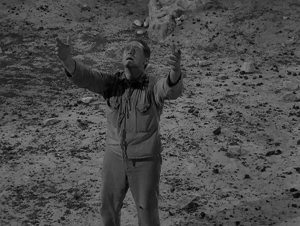 5) You Drive (Season 5): Heading home from work one evening, distracted driver Oliver Pope hits a neighborhood boy with his car, badly injuring him. Scared, he flees the scene. Pope tries to act like nothing’s wrong, even when news comes that the boy has died and another man is blamed for it. Unfortunately for him, his car has other ideas — and it seems determined to reveal the identity of the real hit-and-run driver. Written by Earl (“The Waltons”) Hamner.

No marathon is perfect. Thanks to DVDs, Blu-rays and Netflix streaming, though, it’s easy to fill in the gaps. All of these episodes are on Hulu and iTunes. Why wait until New Year’s?