Becoming the best in your field typically takes a big ego. Which isn’t surprising — if you don’t believe deeply in your own ability, you may not even get to the top, let alone stay there.

Unless you’re a genuine ego-maniac, though, self-doubt is always at your elbow. Exhibit A: Rod Serling. 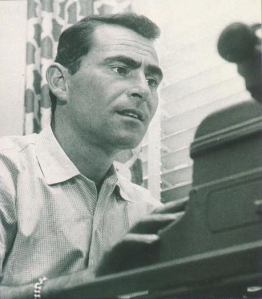 Good luck finding anyone harder on his work than he was. Listen to his commentary on the Twilight Zone’s “Walking Distance” sometime. He almost completely trashes one of the most beloved episodes of the entire series. And that was typical; he rarely offered a word of praise to anything he’d written. In other commentaries (excerpts from lectures he gave at Hollywood’s Sherwood Oaks Experimental College), he repeatedly emphasizes what he considers flaws.

Yes, he may have been doing this in part to encourage the students to really take a piece of film apart. But other examples of this self-critical attitude crop up throughout his life.

Even the compliments were severely hedged. Looking back over Season 4, for example (when Twilight Zone had gone to an hour-long format), Serling said only one of the episodes was “really effective”: his own “On Thursday We Leave For Home.” He then added: “Yes, I wrote it myself, but I overwrote it. I think the story was good despite what I did to it.”

I’ve pretty much spewed out everything I have to say, none of which has been particularly memorable. I’ve written articulate stuff, reasonably bright stuff over the years, but nothing that will stand the test of time. The good writing, like wine, has to age well with the years, and my stuff is momentarily adequate.

And that’s downright glowing compared to this self-assessment: “Every now and then, you write something that you think at the moment is quite adequate, and then many years later you suddenly realize you have given birth to a turd.”

In what would be his last interview, he added, “There are a lot I’m proud of, and a lot I wish the hell I’d never written.”

Now, even the biggest Serling fan has to admit that some of his work deserves criticism. He wasn’t always writing at the top of his game (who among us does?); some of it was just adequate. But most of it was well above average, and a sizable portion of it was excellent. Surely the fact that we’re still watching and enjoying Twilight Zone, Night Gallery, and his other shows and movies more than 30 years after his death is a good indication that his “stuff” was, in fact, “particularly memorable.”

So the next time our own self-doubts creep in, it’s worth remembering that it happens to the best of us.